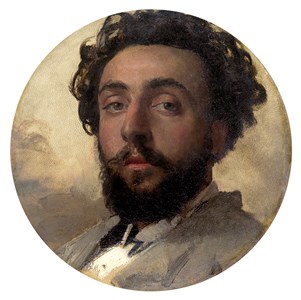 A painter, lithographer and designer of stained glass, Ludovic Alleaume studied in his native Angers, where he was apprenticed to decorative painters. At the age of eighteen he entered the Ecole des Beaux-Arts in Paris, where his teachers were Ernest Hebert and Luc-Olivier Merson. In 1888 he spent two months in Palestine, returning there for a year in 1890, and the studies that he made in and around Jersualem resulted in a number of Orientalist pictures. Alleaume also painted Biblical themes, mainly from the New Testament, as well as allegorical and literary subjects, landscapes, nudes, portraits and genre subjects. An excellent draughtsman, Alleaume worked in an academic style that owed little to the more avant-garde trends in contemporary French art. He exhibited regularly at the Salon des Artistes Français between 1883 and 1938, winning several prizes including a second prize in the category of lithography in 1896 and a second class medal for painting in 1905. Alleaume also exhibited at the Salon des Humoristes and the Salon d'Hiver and, outside of Paris, took part in exhibitions in Angers, Nantes, Nice, Rouen and Toulouse, as well as London. In Paris he exhibited his work at the Galerie Georges Petit, and from 1894 onwards showed with the Société des Peintres-Lithographes, of which he was elected vice president in 1934. Among his public commissions were an allegorical ceiling painting for the Caisse d’Epargne in Laval and murals for several churches, notably a large cycle of paintings for the church Saint-Nicolas in Craon, painted between 1892 and 1899 in collaboration with the painter Ladislas Dymkowski. Alleaume was a gifted portraitist, although this aspect of his oeuvre remains relatively little known today. His first Salon entry, in 1883, was a portrait of his friend Jean-Baptiste Rouard, and he continued to produce portraits throughout his career, albeit intermittently. He also contributed illustrations to Le Monde illustré, the Revue de Bretagne and the Revue de l’Anjou.Ludovic Alleaume is perhaps best known today as a designer of stained glass decorations. Between 1893 and 1937, he divided his time between his own studio on the Boulevard Saint-Germain in Paris and that of his elder brother, the glass painter Auguste Alleaume (1854-1940), in Laval. The younger Alleaume produced numerous drawings and full-size cartoons for stained glass which were frequently executed by Auguste, or by other glass painters working in Brussels, Lille, Paris, Rennes and Rouen. He designed stained glass windows for churches in Laval and elsewhere in the départément of Mayenne; at Bourgon, Chailland, Cuillé, Désertines, Fougères, Larchamp and elsewhere, as well as churches in Saint-Cloud and Saint-Germain-en-Laye. Almost 650 preparatory drawings and over 350 cartoons for stained glass windows by Alleaume are preserved today in the Archives départementales de la Mayenne and the Musée du Vieux-Château in Laval, which also houses some paintings and drawings by the artist and two stained glass windows by the Alleaume brothers. Other works by Ludovic Alleaume are in the museums of Angers, Nantes and Rennes, and a major exhibition of his work was mounted in Laval in 2014-2015.