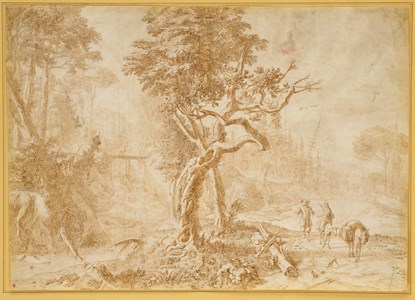 A pupil of Sybrecht Moninckx in The Hague between 1634 and 1635, although his name already appears in the register of the Guild of Saint Luke in the city by 1631, Hendrick Sonnius spent some time in Rome in the 1640s, where he may have worked for the Pope. He was back in The Hague by 1649, and 1656 is recorded as one of forty-eight artists - including Jan de Bisschop, Jacob van der Does, Joris van der Hagen, Adriaen Hanneman and Adriaen van de Venne – who, unhappy with the Guild of Saint Luke, founded the Confrerie Pictura, a local brotherhood of painters in The Hague. Sonnius is last recorded in The Hague in 1659, and seems to have spent the latter part of his career in England, where he is thought to have died at a very advanced age. He may perhaps be identified with the artist (Frederik?) Sonnius who worked in London as one of the chief assistants to Sir Peter Lely, and who was described in 1688 as ‘old and touchy’. Hendrick Sonnius is documented as a landscape and portrait painter, though no examples of the latter have survived. Indeed, only two paintings by the artist are known today; a signed Italianate Landscape in the Musée d’Art et d’Histoire in Geneva and an Italianate Landscape with Peasants among Ruins, signed and dated 1645, which appeared on the art market in Belgium in 2005.