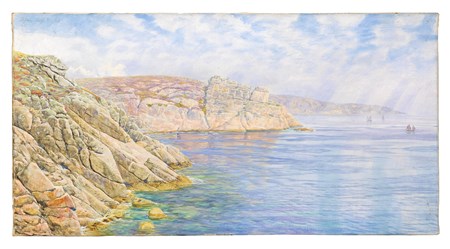 John Brett enrolled in the Royal Academy Schools in 1854, at the relatively late age of twenty-two. A devout reader of the writings of John Ruskin, he was attracted by the work of the Pre-Raphaelites and met Dante Gabriel Rossetti and William Holman Hunt. In 1856, while travelling in the Bernese Oberland in Switzerland, he met the landscape painter John William Inchbold, whose work proved to be a significant inspiration. Soon afterwards Brett completed his first major painting, The Glacier of Rosenlaui, dated August 1856 and shown at the Royal Academy the following year; the painting is today in the collection of Tate Britain. In 1858 he exhibited a second major canvas, The Stonebreaker, at the Royal Academy; it is now in the Walker Art Gallery in Liverpool. This was followed a year later by what is arguably Brett’s masterpiece as a Pre-Raphaelite landscape painter; a remarkable view of The Val d’Aosta that was praised by Ruskin in his Academy Notes and was eventually bought by him. Not long afterwards, however, the relationship between Brett and Ruskin became somewhat strained. From 1865 onwards, Brett painted mainly maritime scenes and coastal views in England and Wales, and was particularly fond of the rugged coastlines of Devon, Cornwall and Wales, as well as the Channel Islands of Jersey and Guernsey. After his marriage in 1870, Brett spent most of his summers making sketching tours, including three years in the 1880s when he and his family spent weeks onboard a yacht, sailing the coastline of Britain. Always of a scientific bent, he was especially interested in astronomy, and in 1871 became a fellow of the Royal Astronomical Society. In 1881 he was elected an Associate of the Royal Academy, although he never rose to the position of Academician. The last decade or so of Brett’s career were a constant struggle, as his work fell out of favour and fashion, although his sea paintings continued to be exhibited throughout Britain and even occasionally at the Paris Salon. Although he often lectured on art and published several articles, he painted little after 1897, and died in relative obscurity at the age of seventy. Nevertheless, speaking shortly after his death, the President of the Royal Academy, Sir Edward Poynter, could praise Brett as ‘one of the most original of our landscape artists’. Also within a few weeks of Brett’s passing, a small group of his paintings was included in an exhibition of paintings of Cornwall at the newly-established Whitechapel Art Gallery in London.In the introduction to the catalogue of an exhibition of his landscape oil sketches at the Fine Art Society in 1886, entitled Three Months on the Scottish Coast, Brett described his working method in some detail. When planning a painting of a particular view, he would make small oil sketches on the spot, completing each one in two or three hours without any subsequent retouching. (On days when the weather precluded working out of doors, he would produce small-scale paintings.) Some of these oil sketches would later be worked up in his London studio, over the winter months, into full-scale exhibition canvases, often of considerable size.