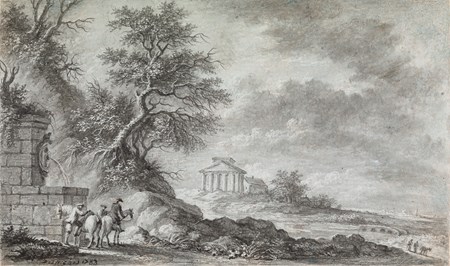 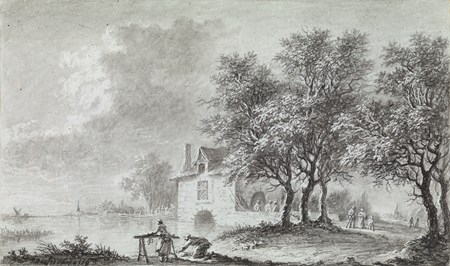 Aignan-Thomas Desfriches studied in his native Orléans before moving in 1733 to Paris, where he completed his artistic training in the studios of first Nicolas Bertin and later Charles-Joseph Natoire. He became the director of the drawing academy established under the patronage of the duc de Rohan-Chabot, but returned to Orléans at the end of the 1730s to take over his father’s spice importing business. He worked in Orléans for the remainder of his career, and founded the Ecole de Peinture, de Sculpture et d’Architecture d’Orléans in 1786. Active primarily as a landscape painter and draughtsman, Desfriches was strongly influenced by the Dutch masters of the 17th century. He first visited the Netherlands in 1753, and began collecting Dutch paintings and drawings soon afterwards, buying many works on a second trip in 1766. Indeed, he was particularly active as a collector, and by 1778 the inventory of his collection listed a total of 114 paintings and sculptures, as well as between two and three hundred drawings. A portion of his collection was given by his widow to the Musée des Beaux-Arts in Orléans in 1824.As a draughtsman, Desfriches produced charming landscapes of the countryside around Orléans and the valley of the river Loire and its tributaries, peopled by acutely observed peasants and travellers. Prominent among a large number of topographical drawings is a vast panorama of the city of Orléans, now in the collection of the Musée des Beaux-Arts there. In the latter part of his career, Desfriches adopted the practice of drawing on a coated grey-blue paper he had invented, known as papier-tablette, producing landscape drawings of marvellous precision and delicacy. These small drawings, often mounted on wooden snuffboxes, were regularly presented by the artist to particular friends.