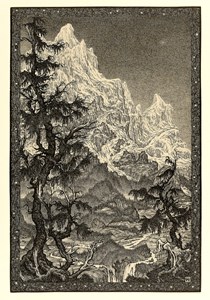 A German painter and graphic artist, Hermann Wöhler studied in his native Hanover, as well as in Dresden and Berlin. He was a pupil of the Symbolist artist and illustrator Hugo Hoeppener, known as Fidus (1868-1948), whose work combined mysticism, eroticism and allegory, and was a direct influence on the psychedelic art of the 1960s. From the start of his career, Wöhler, like Fidus, took his subjects from mythology and literature, creating striking works characterized by bizarre imagery and imaginative compositions. At the beginning of his career Wöhler worked primarily in black and white, producing elaborate large-scale drawings in pen and ink. In 1918 he produced a portfolio of seven large ink compositions, plus a title page, under the title Zwielicht: Sieben Sinnbilder / Erste Geschichte des Erwachenden Schicksals vor dem Licht (Twilight: Seven Symbols / The First History of the Awakening Fate of Light), and he continued to create several series of sizeable ink drawings throughout the 1920s, as well as a few lithographs. A deeply intellectual man, Wöhler was well-versed in history and art history, philosophy and classical literature, as well as in Oriental and Eastern religions, Gnosticism and the Kabbalah. Later in his career, Wöhler turned towards fairytale themes, producing a large number of tempera paintings of such subjects, for the most part executed in the 1940s. These works, painted in bold colours, took themes from the well-known stories of Hans Christian Andersen, the Brothers Grimm and Ludwig Bechstein, but shunned the usual manner of depicting these subjects. The artist instead created his own fantastical environments in which the fairytale stories take place; dark green forests and jungles, underwater worlds or urban canyons of buildings. Created during and after the Second World War, Wöhler’s fairytale paintings can be seen as a reaction to, and an escape from, the horrors of war. From 1934 until his death in 1961, Wöhler served as a Professor of art education at the Pädagogischen Kunsthochschule in Hanover. His long career as an art teacher seems to have largely precluded him from selling or exhibiting his own work, however, and his oeuvre was almost completely unknown to the public at large in his lifetime. It was not until 1987, more than a quarter of a century after his death, that the first exhibition of Wöhler’s work was mounted, at a museum in Hanover. Within a few years of this exhibition, a handful of works by the artist began to appear on the market. Between January 2015 and May 2016, a major exhibition of sixty of Wöhler’s tempera paintings, entitled ‘Hermann Wöhler – Zauberhafte Märchenbilder’ (‘Hermann Wöhler: Magic Fairytale Pictures’) was held at the Deutsches Märchen- und Wesersagenmuseum (the German Fairytale Museum) in Bad Oeynhausen, commemorating the recent acquisition by the museum, from his heirs, of over two hundred works by the artist.