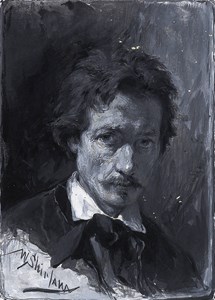 Born near Glasgow in Scotland, Walter Shirlaw settled with his family in New York in 1841, when he was two or three years old. As a young boy, he took night classes at the National Academy of Design, and first exhibited his work there in 1861. The first years of his career were spent as an engraver at the American Bank-Note Company, while at the same time attempting to establish himself as a painter. He later moved to Chicago, where he continued to work as an banknote engraver and also taught art at the Chicago Academy of Design. In 1870, at the relatively late age of thirty-two, Shirlaw travelled to Europe to study. Prevented from settling in Paris by the Franco-Prussian War, he instead studied in Munich, where he joined the small group of American painters working in the city, including Frank Duveneck and William Merrit Chase. Shirlaw enrolled at the Akademie der Bildenden Künste, where his teachers included Alexander von Wagner, and remained in Germany for seven years. It was while he was studying in Germany that he produced his first significant painting, Tuning the Bell, which received a medal at the Centennial Exposition in Philadelphia in 1876. This was soon followed by his best-known work; the Sheep Shearing in the Bavarian Highlands. Arguably his masterpiece, the painting was exhibited in Munich in 1876, in New York the following year, and in Paris the year after that, and is today in the collection of the Saint Louis Museum of Art.On his return to New York, Shirlaw began teaching at the Art Students League. Together with Chase, a fellow graduate of the Munich Akademie, he helped to popularize the principles of the Munich School, pioneering a more realistic style of painting, characterized by direct modelling, heavy and quickly sketched brushstrokes, and a darker colour palette. In 1877 Shirlaw was one of a group of young artists who, dissatisfied with the conservatism of the National Academy, established the Society of American Artists, of which he served as the first president. A large exhibition of his work was held in a gallery in Boston in 1880. Shirlaw also designed stained-glass windows and worked as an illustrator for such magazines as Harper’s Monthly and Century. He also painted mural decorations for private homes, notably a large frieze – measuring sixty feet in length – of Peace and Plenty for the dining room of the home of Mr. D. O. Mills on Fifth Avenue in New York, as well as murals for the Library of Congress in Washington, D.C.. Elected an Academician of the National Academy in 1888, Shirlaw was also a member of the Mural Painters Society and the Water-Color-Etching Society. By the end of his life Shirlaw was an obscure figure, better known as a teacher than as an artist. Shortly after his death, during a visit to Spain in 1909, an obituary in the American Art News noted, ‘For many years...he was generally regarded as one of the most promising of artists painting in America. His pictures at that period received high praise from press and public. A strong draughtsman, a good colorist and virile in his work, his future seemed full of promise. Never a prolific painter, he gradually slackened his efforts, devoted much of his time to teaching, and finally ceased to be a prominent figure in the American art world. The present generation knows little or nothing of his work.’ A memorial retrospective exhibition of paintings and drawings by Shirlaw, numbering 267 works in total, was held at the Carnegie Institute in Pittsburgh in 1911. At the same time, his widow donated many of his works to several institutions across America; including the New York Public Library, Cooper Institute, New York City College, the American Museum of Natural History, the Metropolitan Museum of Art, the Museum of Fine Arts in Boston, the National Academy of Design, the Corcoran Gallery of Art, the Toledo Museum of Art, and elsewhere. As a draughtsman, Shirlaw worked in pastel, watercolour, chalk and pencil. As a contemporary article on the subject of Shirlaw’s drawings noted, ‘both pencil sketches and charcoal studies illustrate the artistic freedom which usually characterize the work of this accomplished painter.’ Another critic noted in particular of his drawings for illustrations, ‘Shirlaw illustrates like a painter and an artist, and he therefore gets a fulness out of, and gives a richness to a subject, not characteristic of the average illustrator. His drawings have tone, depth, and sense of construction; they show the intelligent observer and the skill of the practised student. The salient point of the subject is well understood, and expressed with effect, often with much picturesqueness and dramatic force.’ A large group of over thirty drawings by the artist was presented to the National Academy of Design by his widow in 1911.