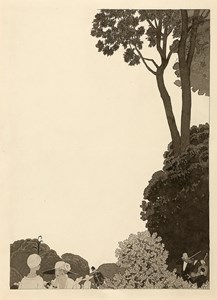 After initially studying philosophy, and following a trip to Italy, André Edouard Marty began studying at the Ecole des Beaux Arts in Paris, in the studio of Fernand Cormon. It was at the Ecole des Beaux Arts that he met the artists Georges Lepape, Charles Martin and Pierre Brissaud, all of whom were also to work as fashion illustrators. He also came under the particular influence of the illustrator Maurice Boutet de Monvel, reflected in the refined and elegantly stylized figures found in his own work as an illustrator. Marty’s earliest published illustrations appeared in 1909 in the theatrical review Comoedia Illustré, to which he continued to contribute drawings over the coming years. In 1910 Marty was commissioned to design a poster advertising the Ballets Russes at the Opéra; the drawing for this is today in the collection of the Musée de la Publicité in Paris. He continued to work as a theatrical designer in later years but was chiefly occupied with producing numerous fashion illustrations for the magazine Gazette du Bon Ton, mainly between 1913 and 1925, alongside his fellow artists and illustrators Brissaud, Lepape, Martin and Boutet de Monvel. As one modern-day fashion illustrator has described him, ‘Of all the Gazette artists, Marty…was perhaps the most romantic and elegiac.’ After the First World War Marty continued to provide illustrations for the Gazette du Bon Ton, as well as for Vogue, Femina, L’Illustration des Modes, Monsieur, Harper’s Bazar, Le Sourire and House and Garden, among others. He also illustrated around fifty books, most notably Henri de Regnier’s Scènes Mythologiques, published in 1924, and produced designs for posters for London Transport. Working with the Compagnie des Arts Français, established by the architect Louis Süe and the decorator André Mare, Marty contributed to the decoration of the Pavillon Fontaine at the seminal Exposition des Arts Décoratifs of 1925, for which he also served on the jury. Twelve years later, at the Exposition Internationale of 1937, Marty again worked alongside Süe on the decoration of the jardin d’hiver of the Pavillon de la Société des Artistes Décorateurs, painting four wall panels devoted to the subjects of Pole Vaulting, Horseback Riding, Basketball and Tennis. Exhibitions of Marty’s work were held in Paris at the Galerie Georges Petit in 1912, the Galerie Levesques in 1913, and at the Galerie Lucien Vogel and the Galerie Devambez in the 1920s.