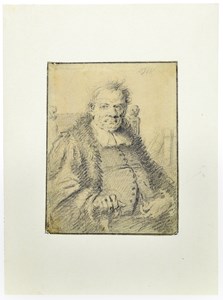 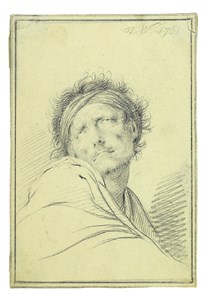 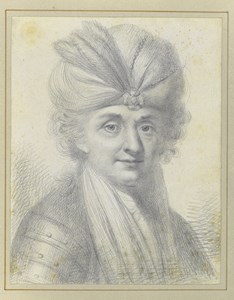 Active as a painter, draughtsman and printmaker, Thomas Worlidge lived and worked in London and Bath. The son of a lawyer, he received his artistic training from the expatriate Italian painter Alessandro Grimaldi, and also had instruction in printmaking from the French engraver Louis-Philippe Boitard. Throughout Worlidge’s career, however, the prime influence on both his style and his oeuvre were the prints and drawings of Rembrandt, whose etching manner he imitated. Worlidge is credited with introducing the artists William Hoare and Thomas Gainsborough to the work of Rembrandt, and may be regarded as a leading figure in the Rembrandt revival in England in the 18th century. Although he lived mainly in Covent Garden in London, Worlidge worked in Bath for several months each year between 1743, when he married a woman from the city, and his death in 1766. Described by one modern scholar as ‘the most original printmaker to work in Bath in the eighteenth century’, Worlidge sometimes signed his etchings ‘Thos. Worlidge Painter in Bath’. Like Gainsborough, Worlidge counted among his clients many of the fashionable people who stayed in Bath during the winter social season. Best known as a draughtsman and etcher, Worlidge also worked as a miniaturist and portrait painter. However, only a few paintings by him survive today, notably a full-length portrait of the actor David Garrick of 1752, of which autograph versions are in the collections of the Victoria and Albert Museum and the Garrick Club in London. He also painted a handful of self-portraits, and made etchings from two of them. Furthermore, he produced a number of finished portrait drawings in graphite or chalk on vellum or paper, for which he would ask two guineas or more. Worlidge was best known, however, as a printmaker, usually working in a Rembrandt-like manner. (He was, in fact, known as the ‘English Rembrandt’.) His etchings were very popular and were sold in galleries and bookshops in Bath and London, even long after his death. The 18th century cleric and author William Gilpin, in his An Essay upon Prints, published in 1768, noted that ‘Among the imitators of REMBRANDT, we should not forget our countryman WORLIDGE; who has very ingeniously followed the manner of that master; and sometimes improved upon him. No man understood the drawing of a head better.’ Worlidge made direct copies of Rembrandt prints as well as compositions of his own in the manner of the Dutch artist. As one modern scholar has noted, ‘Worlidge had a particular affinity with and interest in Rembrandt’s work; he produced intelligent painted and printed essays in Rembrandt’s style.’ Among his most important patrons was Sir Edward Astley, a noted collector of prints, who came to possess over six hundred prints by Worlidge, and also owned a famous collection of prints by Rembrandt. (Among Worlidge’s most famous etchings is a portrait of Astley in the pose of Rembrandt’s 1647 etched portrait of the Burgomaster Jan Six.) In 1754 Worlidge held a public auction of his work, which included copies of two self-portraits by Rembrandt and other works inspired by the master. Worlidge’s last significant project was the Select Collection of Drawings from Curious Antique Gems, most of them in the possession of the nobility and gentry of this kingdom, Etched after the Manner of Rembrandt, which was posthumously published in 1768, two years after his death. The largest extant collection of prints by Worlidge is today in the collection of the Peterborough City Museum and Art Gallery, in the town of his birth. Unlike his prints, however, drawings by Worlidge are rare today; examples are in the collections of the British Museum, the Courtauld Gallery and Tate Britain in London, the Ashmolean Museum in Oxford, the Victoria Art Gallery in Bath and the Royal Library at Windsor Castle, as well as the National Gallery of Scotland in Edinburgh, the Huntington Library in California and the National Gallery of Canada in Ottawa.