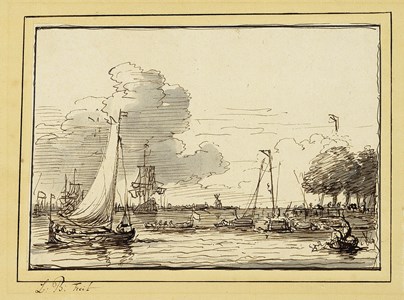 Born in Germany, Ludolf Bakhuizen (sometimes Bakhuyzen or Backhuysen; over the course of his career the artist changed the spelling of his surname several times) had by 1649 settled in Amsterdam, where he worked as a calligrapher and bookkeeper for the important merchant Guglielmo Bartolotti. The biographer Arnold Houbraken states that Bakhuizen began making drawings of ships and marine subjects soon after arriving in Amsterdam, despite having relatively limited training as an artist. Some of his earliest works were elaborate pen drawings on prepared canvas or wood; known as ‘penschilderij’, these seem to have been inspired by similar works produced by Willem van de Velde the Elder.Drawing seem to have been something of a hobby for several years, however, and Bakhuizen did not join the Guild of St. Luke in Amsterdam until 1663. By this time he had also taken up painting, after receiving instruction from Allaert van Everdingen and the marine painter Hendrick Jacobsz. Dubbels. By the 1660s Bakhuizen was established as one of the leading marine painters in the city, receiving numerous commissons and enjoying the patronage of several important patrons, including Czar Peter the Great of Russia. After 1672, when Bakhuizen’s main competitors as marine artists, Willem van de Velde the Elder and Willem van de Velde the Younger, moved to England to work for Charles II, his output increased significantly. As well as numerious marine paintings and drawings, Bakhuizen also produced around twenty etchings.