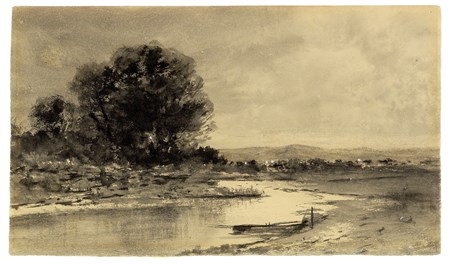 Born in Scotland, William Hart emigrated to America with his family in 1831, settling in Albany in New York State, where he was apprenticed to a carriage maker. He was self taught as an artist, and by the age of eighteen had begun to make landscape drawings of views in the Hudson River valley, as well as portrait paintings. During the 1840s Hart travelled extensively around America, working as a portrait painter in Troy, New York and Richmond, Virginia, as well as in Michigan. He returned to Albany in 1847 and, after a few years studying abroad, mainly in Scotland, Hart eventually moved to New York City, opening a studio there in 1854. Like his younger brother, James MacDougal Hart, William Hart is best known as a landscape painter, often of idyllic pastoral subjects, and may be counted a member of the second generation of the Hudson River School of artists. Many of Hart’s paintings were reproduced as engravings and, in colour, as chromolithographs, and were also widely disseminated in the form of art journals and such illustrated books as Picturesque America. He was also regarded as a fine teacher, and among his pupils and followers was the landscape painter Homer Martin. Hart later settled in Brooklyn, where in 1865 he became the first president of the Brooklyn Academy of Design. The late 1880s found Hart painting in the Lower Keene Valley in the Adirondacks, in the northern part of New York State, and the last years of his career were spent in Mount Vernon, New York, where he died in 1894. Paintings by William Hart are in the collections of the High Museum of Art in Atlanta, GA., the Wadsworth Atheneum in Hartford, CT., the Metropolitan Museum of Art, the New-York Historical Society and the National Academy of Design in New York, the Allen Memorial Art Museum in Oberlin, OH, the Smithsonian American Art Museum in Washington, D.C., and elsewhere. A large group of some four hundred drawings, watercolours and annotated sketchbooks by Hart, which were among the contents of the artist’s studio at the time of his death, is today in the Albany Institute of History & Art, while other landscape drawings by the artist are in the Frances Lehman Loeb Art Center at Vassar College in Poughkeepsie, New York, the Museum of Fine Arts in Boston, and the National Gallery of Art in Washington, D.C.