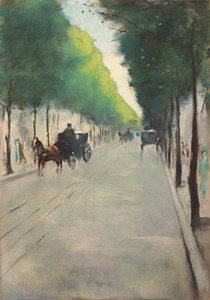 The son of a baker, Leo Lesser Ury was born in 1861 into a German Jewish family in Prussia, and on his father’s death in 1872 moved with his family to Berlin. In 1879 he enrolled at the Kunstakademie in Düsseldorf. He spent some time in Paris, Brussels, Antwerp and Stuttgart before returning to Berlin in 1887. Two years later he had his first one-man exhibition, which saw his work meet with critical disapproval but gain the support of Adolph von Menzel and earn the artist a prize from the Kunstakademie. In 1893 Ury joined the Munich Secession, returning in 1901 to Berlin, where he was to become arguably the finest painter of the city’s streets around the turn of the century. As one scholar has written of the artist, ‘He painted Berlin as no other painter did at a time when the small Prussian royal seat was rapidly developing into the capital of the German Reich.’Lesser Ury’s paintings and pastels of landscapes, urban views, nocturnal street scenes and interiors, painted in a free and Impressionistic manner, proved very popular and were much in demand. As has also been noted, ‘[Ury was] a poet of light and atmosphere...He shows us the streets of Berlin and the alleys of Tiergarten in every season, in rain or sunshine (with a preference for rain), at every hour (very often at night, with subtle renderings of artificial light).’ He also painted several portraits, as well a number of explicitly Jewish subjects. Initially a close friend of the other great German Impressionist painter, Max Liebermann, Ury found his relationship with the elder artist souring abruptly in the 1890’s, leading to a lifelong mutual animosity. Liebermann managed to exclude Ury from the Berlin Secession for several years, and he was only eventually admitted at the recommendation of Lovis Corinth. Ury exhibited at the Berlin Secession with some regularity from 1915 onwards, and most notably in 1922 when a major exhibition of his paintings and pastels, numbering 150 works, was mounted in honour of his sixtieth birthday. In 1926 Ury visited London and painted a number of views of the Thames, its bridges and the Embankment that are, in compositional terms, often reminiscent of his Berlin street scenes; the same is true of his Parisian views of 1928. A solitary and misanthropic man, Ury was something of a recluse by the 1920’s, and only rarely left his studio on Berlin’s Nollendorfplatz. Within a few years of his death, much of his output had been destroyed by the Nazis in their purge of the work of Jewish artists.