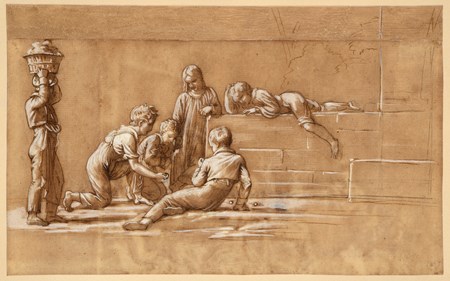 Antoine Béranger is perhaps best known for his work as a designer at the Manufacture de Sèvres porcelain factory, which was under the direction of Alexandre Brongniart. In July 1808, soon after Béranger began working at Sèvres, Brongniart described the young artist, in a letter to the intendant général de la maison de l’empereur, as a ‘young man little known but already possessed of talent and promising of more in the judgment of artists who have seen his work.’ Béranger painted and decorated many pieces of porcelain for Sévres, notably a large vase in the ‘Etruscan’ style that depicted the triumphal procession into Paris of some of Rome’s most famous antiquities, including the Laocoön group and the Apollo Belvedere, brought from Italy and destined for the Musée Napoleon. Richly decorated in gold and over a metre in height, this beautifully painted vase was made in 1813, and was described by Brongniart as one of the most beautiful works to come from the workshops at Sévres. (After the abdication of Napoleon in 1814 and the return of the Bourbons to power, Brongniart saved the vase from destruction.) As a painter of historical and genre subjects, Béranger exhibited yearly at the Salons in Paris between 1814 and 1849. The stylistic influence of Louis-Léopold Boilly is evident in many of his genre paintings, such as The Consequences of the Seduction, exhibited at the Salon of 1840 and now in the collection of the Musée d’Orsay and on loan to the Musée de l’Assistance Publique in Paris. Béranger was active as a lithographer, and also designed stained-glass windows for the chapels of Dreux and Trianon, His daughter and two sons were all artists.