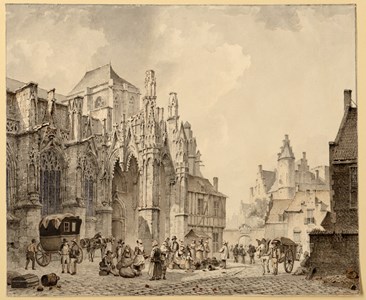 A pupil of Hendrik Gerrit Ten Cate and Georg Peter Westenberg, Kaspar (or Kasparus) Karsen was one of the most important Dutch painters of townscapes and city views of the 19th century. He lived and worked in Amsterdam for most of his career, apart from a period spent in Haarlem between 1842 and 1844. He was admitted to the Academy in Amsterdam in 1836, and three years later joined the Dutch artist’s society ‘Arti et Amicitiae’. One of the finest painters of city scenes and river views of his day, Karsen was particularly skilled at rendering architecture. He travelled to Prague and throughout Germany, and incorporated elements from the cities and towns he visited abroad into what were sometimes imaginary compositions. Although he had some success as a painter, he seems to have constantly struggled financially – no doubt partly due to the need to support fifteen children from his three marriages - and was also apparently quite a somewhat temperamental and moody character. Among his pupils was Cornelis Springer, who assisted him on some of his mature works, as well as his son Eduard.Drawings by Karsen are today in the Rijksprentenkabinet in Amsterdam (whose collections include a sketchbook by the artist), the Teyler Museum in Haarlem, the Rijksprentenkabinet in Leiden, the Kröller-Müller Museum in Otterlo, the Museum Boijmans-van Beuningen in Rotterdam, and elsewhere.