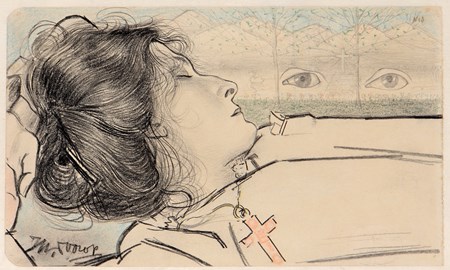 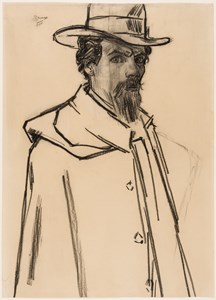 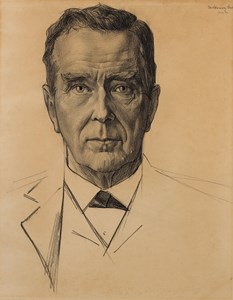 Born and raised in Java in the Dutch East Indies, Jan (Johannes) Theodoor Toorop settled in Holland in 1872, at the age of fourteen. He studied in Delft, Amsterdam and Brussels, where he lived between 1882 and 1886. There he met James Ensor, with whom he travelled to Paris. In 1884 he became a member of the Belgian artistic and literary group Les XX (Les Vingt), formed the previous year and centred on Ensor, and proceeded to exhibit with the group for several years thereafter. His early work saw the artist working in a variety of styles, sometimes concurrently, ranging from Realism to Impressionism and Neo-Impressionism; the latter in particular was used for a series of splendid and brightly-coloured pointillist landscapes, as well as some portraits and genre scenes, until 1907. Toorop had his first exhibition in 1885, and the same year visited England, where he met James McNeill Whistler and discovered the work of the Pre-Raphaelite painters and William Morris. After his marriage to an Englishwoman in 1886, Toorop divided his time between England, Brussels and The Hague, as well as the small artist’s colony in the seaside resort of Katwijk aan Zee in Holland, where he lived from 1890.In the early 1890s, influenced by the writings of Emile Verhaeren and Maurice Maeterlinck, Toorop began to work in a Symbolist vein, producing a number of large, complex and highly finished drawings which are among his most famous works. Perhaps the best known of these impressive Symbolist drawings - densely drawn and iconographically mysterious works in which the influence of Aubrey Beardsley and the Pre-Raphaelite painters is evident - are O Grave, Where is Thy Victory? of 1892, today in the Rijksmuseum in Amsterdam, and The Three Brides of 1892-1893, in the Kröller-Müller Museum in Otterlo. Toorop’s work began to be exhibited abroad, notably at the first Salon de la Rose + Croix in Paris in 1892 and at the Vienna Secession in 1900 and 1902, where it was a particular influence on the work of a slightly younger artist in Vienna, Gustav Klimt. By the turn of the century Toorop was established among the leading avant-garde artists in Holland, with his work influential in the development of the International Art Nouveau style. Among Toorop’s first large-scale public commissions were three ceramic murals for the Beurs van Berlage, the stock exchange building in Amsterdam, completed in 1903. In 1905 Toorop, together with his daughter Charley, converted to Roman Catholicism, which would have a profound impact on his work for the remainder of his career. He began to produce a large number of often overtly religious works, many of which were reproduced as prints or in facsimile and displayed in private homes throughout the Low Countries. Among the few official commissions he received from the Catholic Church in Holland were designs for stained glass windows in the Sint Jozefskerk in Nijmegen, executed in 1913, as well as a series of paintings of the Stations of the Cross for the church of St. Bernulphus in Oosterbeek, begun in 1916 and completed in 1919. By this time he was in poor health, however, and by 1920 was largely confined to a wheelchair, with his left leg paralyzed. Nevertheless, he continued to work effectively, producing numerous drawings and prints.As a draughtsman, Jan Toorop was extremely accomplished, both in his use of a range of materials and also in the effects he was able to achieve with them. As has been noted of his monumental drawings of the early 1890s in particular, ‘His Symbolist work, chiefly executed in pencil, black crayon and coloured chalk, was dominated by powerful draughtsmanship.’ Toorop produced designs for posters, book illustrations and covers, and postage stamps. He also made around fifty prints, mainly drypoints, for which he perferred to use zinc plates instead of the harder copper plates, which meant that only a few impressions of each print could be made. Toorop was also a superb portraitist, and produced a large number of drawn and painted portraits of family, friends and fellow artists, as well as many portraits – usually in the form of highly finished drawings - of some of the leading Dutch writers, poets, clergymen, politicians, lawyers, musicians, composers and intellectuals of his day. Indeed, Toorop may justifiably be claimed as one of the finest Dutch portraitists of the early 20th century.