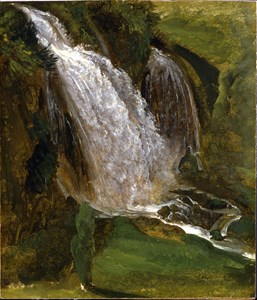 Simon-Joseph-Alexandre-Clément Denis studied in his native Antwerp with the landscape and animalier Henricus Josephus Antonissen before moving to Paris in 1775. There he met the picture dealer Jean-Baptiste Pierre Lebrun, who financed a trip to Rome in 1786. Denis was to work in Italy for the remainder of his career, marrying a Roman woman in 1878 and dividing his time between Rome and Naples for much of the 1790’s. Admitted into the Accademia di San Luca in Rome in 1803, he eventually settled in Naples, and in 1806 was appointed court painter to Joseph Bonaparte, King of Naples. Among his other important patrons were members of the Russian Imperial family.