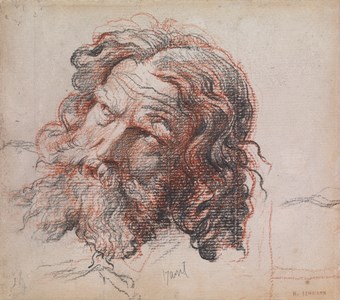 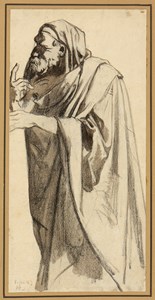 Born in the German Duchy of Holstein, Henri Lehmann first studied with his father Leo, a portrait painter and miniaturist. In 1831 he settled in Paris, where the following year he entered the studio of Jean-Auguste Dominique Ingres. He soon became one the master’s favourite pupils and assistants, alongside the brothers Paul and Hippolyte Flandrin. At his Salon debut in 1835 Lehmann won a second-class medal with a painting of Tobias and the Angel, the first of several honours and prizes he was to earn throughout his career. Although he was not permitted to compete for the Prix de Rome, by virtue of his German citizenship, he nevertheless travelled at his own expense to Rome in 1838, rejoining his master Ingres, who had been appointed director of the Académie de France three years earlier. Lehmann lived in Rome until 1842, often assisting Ingres in his studio. On his return to France Lehmann earned a commission for mural paintings for the Parisian church of Saint-Merri, completed in 1844. Other commissions soon followed, and he began to establish a reputation as a painter of historical and religious subjects, portraits and genre scenes. He became a naturalized French citizen in 1847. During the Second Empire Lehmann painted a number of significant public decorative schemes, notably a series of more than fifty allegorical paintings for the Galerie des Fêtes of the Hôtel de Ville in Paris, completed in 1852 but destroyed by fire during the Commune of 1871, as well as works for the Palais de Luxembourg in the 1850s and the Palais de Justice in the 1860s. Like many of Ingres’ pupils, Lehmann was also in great demand as a fashionable portrait painter. Appointed a professor at the École des Beaux-Arts in 1875, he devoted much of the last years of his career to teaching; among his students was the young Georges Seurat. A large group of drawings by Lehmann is today in the Musée Bonnat in Bayonne.