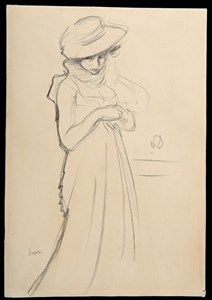 Born and raised in Edinburgh, S. J. Peploe studied at the Edinburgh School of Art, as well as the Académie Julian and the Académie Colarossi in Paris, between 1891 and 1894. He also attended the Royal Scottish Academy, winning a medal in the Life Class there in 1895. His earliest paintings were portraits, still life subjects and landscapes, all treated with a spirited Impressionistic brushstroke. It is not known precisely when Peploe met his close friend and fellow painter John Duncan Fergusson, who was three years younger, but the influence of one upon the other is noticeable in their works of the early years of the new century, in particular the still life compositions. From 1904 onwards Peploe and Fergusson spent the summer months painting together in Normandy, mainly at Étaples. Fergusson eventually settled in Paris, and in 1910 Peploe too moved to France, where his work underwent a significant change in style and tonality. Living in Paris amid the international artistic community of Montparnasse, he met several artists, including Pablo Picasso, whose work he admired, and sent works to the a number of Salon exhibitions. Peploe was back in Edinburgh by June 1912, and worked in Scotland for the remainder of his career, although he continued to make painting trips to France over the next several years, notably at Cassis and Antibes on the Mediterranean coast. His work began to be exhibited in London as well as in Scotland, and much of his output was acquired for sale by the Scottish Gallery in Edinburgh and the Glasgow dealer Alexander Reid. Around this time Peploe became close to another young Edinburgh painter, Francis Campbell Boileau Cadell, who would become a lifelong friend, sketching companion and confidant; the two artists made several painting trips to Iona in the 1920s.Peploe’s work was comprised mainly of still-lifes, each carefully composed, as well as landscapes in Scotland and France. His paintings began to be acquired in depth by a number of important Scottish collectors, notably John Blyth, William Burrell, Robert Wemyss Honeyman, Ion Harrison and J. J. Cowan. Peploe came to be regarded as the leader of a group of four artists – the others being Fergusson, Cadell and George Leslie Hunter – that became known as the Scottish Colourists; a group of Post-Impressionist artists who transposed the colours of modern French painting into a distinctive Scottish idiom in the 1920s and 1930s. The paintings of Peploe, Cadell and Hunter were shown together at the Leicester Galleries in London in 1923, and the following year, with the addition of Fergusson, under the title Les Peintres de l’Ecosse Moderne at the Galerie Barbazanges in Paris. The same four artists were again shown as a group at the Leicester Galleries in 1925. Elected as Associate of the Royal Scottish Academy in 1918, Peploe became a full Academician in 1927. Between 1933 and 1934 he taught briefly at the Edinburgh College of Art, but by then he was already suffering from the effects of ill health. Shortly after his death in 1935, at the age of sixty-four, two memorial exhibitions of his work were held, in Edinburgh in 1936 and in Glasgow in 1937. S. J. Peploe was a gifted draughtsman, working easily in pencil, ink, charcoal and pastel. As his grandson and biographer has noted, ‘Drawing was enormously important to him. It was the cutting edge of his skill and he practised incessantly...He would carry a sketchbook with him wherever he went, making quick, sharply observant drawings of street life in Edinburgh and Paris.’ Indeed, Peploe’s first exhibited work, shown at the Royal Glasgow Institute in 1896, was a finished charcoal drawing, while his first two solo exhibitions, held at the Scottish Gallery in Edinburgh in 1903 and 1909, included as many drawings and pastels as paintings.