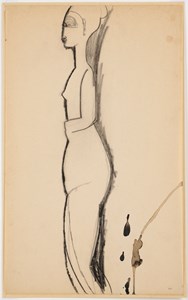 Amedeo Modigliani arrived in Paris in 1906, after studying at the Academies of Florence and Venice. He settled first in Montmartre, where he joined the avant-garde circle of artists that included Pablo Picasso, Juan Gris and André Derain. In 1907 he met his first important patron, Dr. Paul Alexandre, who encouraged him to participate in the Salon des Indépendants the following year. An intensely literate, cultured man, Modigliani befriended Jean Cocteau, Max Jacob, Guillaume Apollinaire and other writers. Despite his friendship with Gino Severini, he declined an invitation to sign the Futurist manifesto in 1910. After moving to Montparnasse, he met Constantin Brancusi and began working as a sculptor, inspired by African and Oceanic art and by Italian Gothic sculpture. Modigliani exhibited a group of his sculptures at the Salon d’Automne in 1912 but, beset by poor health and a shortage of supplies, he abandoned sculpture with the onset of war in 1914. His first one-man show, organized by the Polish poet Leopold Zborowski at the Galerie Berthe Weill in 1917, resulted in a scandal (due to the nudes displayed in the window) that closed the exhibition after one day, without any sales. The artist died of tuberculosis, from which he had been suffering for much of his life, in 1920, at the age of thirty-six.