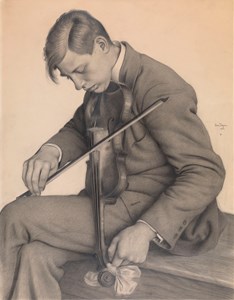 A painter of portraits, figure subjects, flower pieces, landscapes and nudes, John Owe Heribert Zerge was born in the parish of Oppmannasjön, near Kristianstad. Between 1914 and 1915 he studied at the Althin Målarskola (Althin’s School of Painting), set up in Stockholm by the painter Caleb Alstin, who taught drawing there. He then enrolled at the Royal Swedish Academy of Art in Stockholm, where he studied with the painters Olle Hjortzberg and Oscar Björck between 1915 and 1919. Zerge also studied briefly at the etching school established by Axel Tallberg before undertaking study trips to France in 1920 (where he is known to have studied with Andre Lhote in Paris) and Italy, which he visited a number of times in the 1920s. He exhibited at the Paris Salon of 1921, winning an honourable mention, and the following year participated in an exhibition at the Liljevalchs konsthall gallery in Stockholm. In 1923, the year of the present sheet, his work was included in the Swedish Art exhibition in Gothenburg, and he also exhibited regularly at the annual exhibitions of the Skånes konstförenings (Skåne Art Association). By the late 1920s Zerge had returned to settle near his birthplace. Zerge built a studio in the village of Arkelstorp, near Kristianstad, and also designed a splendid garden there which attracted numerous visitors. He was a member of the KRO (Konstnärernas riksorganisation), the Swedish national artists organisation established in 1937, as well as the Skåne Artist Club. He received a large number of portrait commissions, through which he seems to have earned his livelihood, although his other paintings, particularly the flower pieces, also sold well. Perhaps a result of his success, Zerge seems not to have needed to work with any commercial gallery. Only a few exhibitions of his work took place, one of the most significant being a large retrospective held, on the occasion of his fiftieth birthday, in his native Kristianstad. The city also awarded him a culture prize in 1975, and the following year hosted an exhibition of his work at the Ikaros Gallery. Zerge was productive well into his old age, and his style changed little throughout his life. As he himself noted, in a 1976 interview, ‘I paint so incredibly old-fashioned. But I think you should see what is represented. I cannot with the best will in the world think that it makes a person better by putting an eye on the forehead and nose on the chest.’ Although Zerge’s works are today to be found in the museums of Gävle, Kristianstad and Tomelilla in Sweden, he remains largely forgotten in his native county.