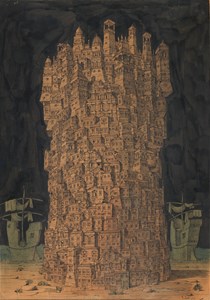 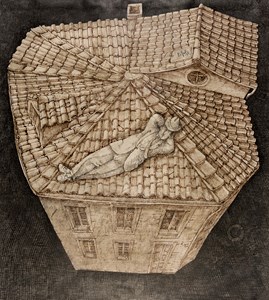 A precocious artist, Domenico Gnoli took private lessons in drawing and etching from the painter and printmaker Carlo Alberto Petrucci in Rome. He exhibited for the first time, aged just seventeen, at the Galleria La Cassapanca in Rome in 1950, and the following year his work was included in the exhibition Art Graphique Italien Contemporain at the Galerie Giroux in Brussels. After briefly studying theatre design at the Accademia di Belle Arti in Rome, Gnoli began working as a scenographer, producing designs for stage sets and costumes for a production of The Merchant of Venice at the Schauspielhaus in Zurich in 1953, while the following year he worked on designs for a staging of As You Like It at the Old Vic Theatre in London that opened in 1955. Despite the makings of a successful career as a scenographer, however, in 1956 Gnoli decided to give up theatrical work and to concentrate on drawing and painting. He lived between London, Paris and Rome before eventually settling in New York in 1956, where his friends included Leonard Bernstein, Henri Cartier-Bresson, Jerome Robbins and Diana Vreeland. One-man shows of Gnoli’s drawings and prints were held in New York in 1956, London and Rome in 1957, Rome in 1958, New York in 1959, and London in 1960. He also worked as a book illustrator, writing and illustrating Orestes or the Art of Smiling, published in London in 1960, and two years later providing illustrations for the American writer Norman Juster’s Alberic the Wise and Other Journeys. He also received commissions for illustrations for magazines as diverse as Fortune, Life, Sports Illustrated, Holiday, Show, Horizon and several others, and in 1968 was awarded a gold medal by the Society of Illustrators in New York. Gnoli is perhaps best known today for his paintings executed from 1964 onwards; large canvases in which the artist almost obsessively concentrates his attention on isolated details of clothing, hair and objects. Gnoli continued to have exhibitions of his work in Italy, France, Germany, England and America, where in 1969 his first solo exhibition of paintings was held at the Sidney Janis Gallery in New York. The year before, while that exhibition was being planned, Gnoli wrote to an American friend in New York: ‘I would hate you to think that I am just losing interest with all this, fooling myself with the idea that Janis will make a great painter out of me, and therefore I needn’t worry about drawings anymore. This would be mad, first because even if the show with him will do well it will only be a temporary success since the art scene is moving so fast that what is great today is shit tomorrow, second, I am, regardless of big money and glamour, a born illustrator, and will not renegade myself.’ Gnoli died in New York in April 1970, just over two weeks before his 37th birthday.Works by Domenico Gnoli are today in the collections of, among others, the Stedelijk Museum in Amsterdam, the Baltimore Museum of Art, the Staatliche Museen in Berlin, the Museum of Fine Arts in Boston, the Musées Royaux des Beaux-Arts de Belgique in Brussels, the Museum Ludwig in Cologne, the Städel in Frankfurt, the Gemeentemuseum in The Hague, the Hamburger Kunsthalle in Hamburg, the Victoria and Albert Museum in London, the Museo Thyssen-Bornemisza in Madrid, the Museum of Modern Art and the Brooklyn Museum in New York, the Kunstnernes Hus in Oslo, the Philadelphia Museum of Art, the Galleria Nazionale d’Arte Moderna e Contemporanea in Rome, the Boijmans-van Beuningen Museum in Rotterdam, the Peggy Guggenheim Collection in Venice and the National Gallery of Art in Washington, D.C.