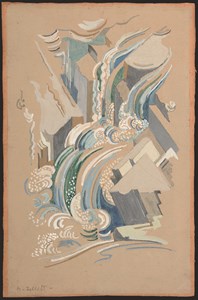 A leading figure in 20th century Irish art, Mary Harriet (known from childhood as Mainie) Jellett was born into a Protestant, Anglo-Irish family in Dublin in 1897. She studied at the Dublin Metropolitan School of Art, where she trained with William Orpen, and later at Westminster School in London, were she came under the tutelage and influence of Walter Sickert, and where she met her close friend Evie Hone. With Hone, Jellett travelled to Paris in 1921 to study with André Lhote, who soon encouraged both women to study with a somewhat reluctant Albert Gleizes. From Lhote and, in particular, Gleizes, Jellett received a grounding in the principles of Cubism, and began to produce abstract compositions. Hone and Jellett remained lifelong friends and colleagues, and both artists have long been credited with helping to bring Cubism, and French Modernism in general, to Ireland. While Hone’s best work was in the field of stained glass, however, Jellett was first and foremost a painter. She developed a style of Cubistic, abstract art that proved to be challenging to both critics and the public in what has been aptly described as the ‘artistically provincial’ Ireland of the 1920s. Shortly after her arrival back in Dublin from Paris in 1923, she showed her first abstract paintings at the Society of Dublin Painters. (This was, it should be noted, a decade or so before the first abstract works of Ben Nicholson, Barbara Hepworth or Henry Moore were exhibited in London.) The reviews of the Dublin exhibition ranged from a bemused incomprehension to some very harsh criticism, one critic going so far as to describe her work ‘sub-human’ and ‘artistic malaria’. Nevertheless, as one scholar has noted, ‘From that moment on, Mainie was fighting the battle for Modernism in Ireland, exhibiting, lecturing, writing and teaching, branching out into the decorative arts.’Although always committed to abtract art, Jellett painted both non-representational and figurative works throughout her career, as well as, particularly in her later years, a significant number of religious works. Apart from the Society of Dublin Painters, she exhibited at the Irish Water-Colour Society and the Royal Hibernian Academy. She did not, however, work in a vacuum in Ireland. She exhibited in Paris at the Salon des Indépendants and at the seminal exhibition L’Art d’Aujourd’hui of 1925, as well as in Brussels and Amsterdam. Jellett was a member of the Abstraction-Création group in France and was associated with Modernist circles in England, exhibiting with the London Group and the Seven and Five Society. She was active as a teacher, writer, lecturer and theorist, and both she and Hone were actively involved in the foundation of the Irish Exhibition of Living Art in 1943. The following year Jellett died of cancer, at the age of just forty-seven. As it was only in the later years of his career that Jellett began to find a steady market for her paintings, a large portion of her oeuvre remained in her studio after her death. Retrospective exhibitions of her work were held at the Hugh Lane Municipal Gallery of Modern Art in Dublin in 1962, and at The Irish Museum of Modern Art in Dublin in 1991.Jellett’s biographer Bruce Arnold has noted that, ‘She was a leading practicioner of a particularly severe form of abstract painting, and she was followed in this by relatively few artists. But she liberated a generation, and led them with a simplicity and directness towards realisation of their own freedom and what they might do with it. She is to be judged by her works above all else. The rich profusion of oils, gouaches, watercolours, temperas and drawings she produced, has earned her the reputation as one of the most powerful and original creative spirits in Ireland in the twentieth century.’ As another recent writer has commented, ‘Just who is Ireland’s greatest woman painter is something to argue over; there can be little doubt as to whom was the most influential, the strongest force for change and modernity, the biggest innovator. That honour belongs to Mainie Jellett.’