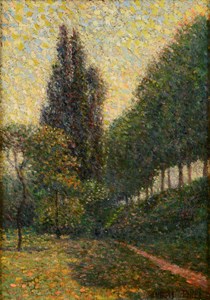 A career army officer and a self-taught artist, Albert Dubois (later Dubois-Pillet) was the only amateur painter among the Neo-Impressionists, and one of the oldest members of the group. After having two still life paintings accepted at the official Salons in 1877 and 1879, Dubois-Pillet found his work rejected for the next four years. In 1884, therefore, he joined the group of artists who established the Société des Artistes Indépendants, for which he drafted the constitution. He became a close friend of Georges Seurat, and was among the first artists to adopt the pointilliste manner of landscape painting. (As Dubois-Pillet said of the younger artist, ‘Seurat, who trained me, I owe him everything! His sense of order, of discipline, I should say, immediately made a profound impression on me.’) He was also one of the first artists to apply pointillist principles to portraiture as well as landscape. Excluded (at the insistence of Degas) from the eighth and final Impressionist exhibition in 1886, Dubois-Pillet contributed ten paintings to the Salon des Indépendants that year, and a further nine works the following year. He remained closely associated with the Artistes Indépendants, exhibiting regularly with them as well as with the Belgian avant-garde group Les XX in Brussels in 1888 and 1890. In 1887 Dubois-Pillet left the army for a time, and was able to concentrate fully on his career as a painter. The only one-man exhibition of his work to be held in his lifetime, including thirteen paintings and four drawings, took place at the La Revue Indépendante in 1888. In 1889 he rejoined the military and was posted to Le Puy-en-Velay as commander of the local gendarmerie, dying there of smallpox in 1890, aged just forty-three. His mature career as an artist had lasted just five years. The following year a room was devoted to a posthumous exhibition of sixty-four of his works – including the present painting - at the Salon des Indépendants. Much of the artist’s output was subsequently lost in a fire, with the result that, by comparison with his most of his Neo-Impressionist colleagues, paintings and drawings by Dubois-Pillet remain quite rare today.