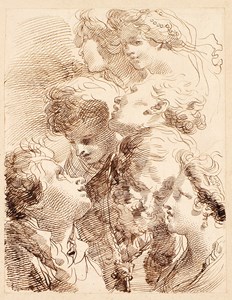 Unlike his father Gaetano and uncle Ubaldo, Mauro Gandolfi enjoyed a relatively brief career as a painter, and only a few paintings by him survive to this day. In his manuscript autobiography, published posthumously in 1841, Mauro noted that he learned to draw by copying his father’s drawings, and it remains as a draughtsman that he is best known today. After training in his father’s studio, Mauro left Bologna for France in 1782, at the age of eighteen, only returning to Italy five years later. He also spent a number of years in France as an adult, and his work can be seen to be a blend of the Bolognese tradition inherited from his father and uncle with the Neoclassical manner prevalent in late 18th century France. Mauro’s first independent works of any significance are two altarpieces painted in 1791 for the church of San Domenico in Ferrara, where they joined another altarpiece painted by his father. By 1794 he had been elected to the Accademia Clementina in Bologna, where he was later appointed to the post of professor of figure drawing. Mauro seems to have largely abandoned painting around the turn of the century in favour of working as a reproductive engraver, a practice he studied during a second stay in France between 1800 and 1806. Many of his prints reproduced paintings by his father, although he also made engravings after the work of contemporaries such as Pelagio Palagi as well as earlier artists like Guido Reni. Mauro Gandolfi paid a visit to America in 1816, spending several months in New York and Philadelphia. His fame as a reproductive printmaker led to a commission to engrave John Trumbull’s painting of The Signing of the Declaration of Independence in the Capitol, though he turned it down. In an account of his travels in America, written in 1822, he notes that he brought with him finished drawings to sell, although none have as yet been identified. On his return to Italy Mauro worked briefly in Florence before settling in Milan, where much of his work was in the form of highly finished drawings and watercolours for sale to collectors, as well as designs for engravings, to be published and sold by a number of the printsellers who were active in the city. After five years in Milan he returned to Bologna for good in 1823, and died there in impoverished circumstances in January 1834.