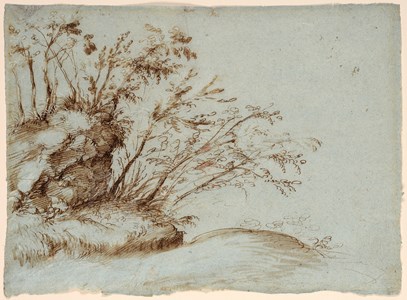 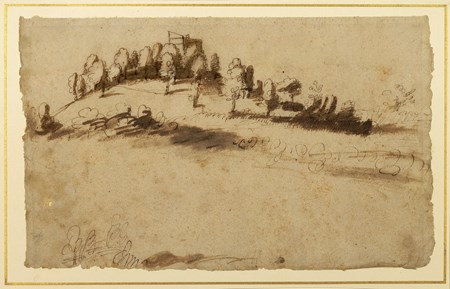 The grandson of Pope Innocent VIII, and also related to the Della Rovere dukes of Urbino, Gherardo Cibo was born into the Genoese nobility. He studied in Rome and Bologna (the latter probably with the famous botanist Luca Ghini), receiving a fine humanist education, and showed a talent for drawing from an early age. He seems to have briefly studied for the priesthood, later becoming a soldier and diplomat attached to the papal court in Rome. In 1540, aged just twenty-eight, Cibo appears to have retired from his papal duties and settled in the small town of Rocca Contrada (today called Arcevia), in the Apennines. As Lucia Tongiorgi Tomasi has written, ‘In this peaceful haven he passed the remainder of his life, free to concentrate on his botanical and artistic pursuits: the painting of plants, trees and landscapes; the colouring and decoration of the images in important printed botanical texts; short excursions with friends into the neighboring countryside on collecting expeditions; and the preparation of medicaments based on herbs.’Cibo dedicated the rest of his life to the study, collection and illustration of the plants and flowers of the Marchigian region, and became one of the foremost botanists of his day. He travelled extensively around the Marches, and corresponded with fellow botanists throughout Italy. A gifted artist, despite his lack of any formal training, he produced a large number of colourful and scientifically accurate botanical illustrations. Among the botanical works illustrated by Cibo is an illuminated herbal in the British Library in London, the pages of which depict plants, painted in tempera, set in expansive landscape backgrounds that correspond closely to the artist’s autonomous landscape drawings. As an amateur landscape draughtsman, Cibo worked mainly in the region of the Marches; in the provinces of Ancona, Pesaro, Macerata and Perugia. As Arnold Nesselrath has noted, ‘Partly because he was an engaging person, partly because he was intrigued by nature, Gherardo would perhaps never have called himself an artist...In his lively sketchbooks he spontaneously recorded views and landscapes, alternating these with rocks, plants, seeds, or pigment tests.’ Cibo’s landscape drawings can be divided into two distinct types; views of actual sites in the Marches on the one hand and purely imaginary landscapes on the other. The landscape drawings made on the spot are often inscribed with the location depicted and with astrological symbols to denote specific day of the week. His drawings also show a distinct influence of the Northern landscape tradition; qualities that may be ascribed to the fact that Cibo travelled to France and Germany in the late 1530s and to Flanders in the 1540s. He also seems to have derived a number of motifs in some of his drawings from landscape prints by Netherlandish artists. While Cibo sent some of his drawings to family members and fellow botanists, most seem to have been done for his own pleasure. That the artist must have assembled his landscape drawings into albums, as he did with his botanical studies, is seen in an extract from a handwritten diary, written from 1553 onwards and now lost: ‘The cavalier Geronimo Ardoino came here to Rocca Contrada...and asked me if he could borrow my large volume of landscapes in pen and ink, which I lent him, having first removed certain sketches on bits of paper that were inside.’ Having lived most of his life in the relative isolation of Rocca Contrada, happily engaged in botanical studies purely for his own pleasure and enjoyment, Cibo died in there 1600, at the age of eighty-eight.Around 150 independent landscape drawings by Gherardo Cibo are known today, some bearing dates between 1560 and 1593. Apart from the three albums in Jesi, significant groups of landscape sketches by the artist are in the Kupferstichkabinett in Berlin, the Szépmüvészeti Müzeum in Budapest, the Uffizi in Florence, the Biblioteca Civica ‘Passionei’ in Fossombrone, the Musée du Louvre in Paris, the Albertina in Vienna and the Staatliche Kunstsammlungen in Weimar. Smaller groups of drawings by Cibo are in the Kunstbibliothek in Berlin, the Kupferstichkabinett in Dresden, the Biblioteca Marucelliana in Florence, the Biblioteca Ambrosiana in Milan, the Morgan Library and Museum in New York, the Hermitage in St. Petersburg, the Biblioteca Angelica in Rome, and elsewhere. A sketchbook of landscape drawings by Cibo, numbering twenty-two sheets, appeared at auction in London in 1989 and is today in a private collection in France.