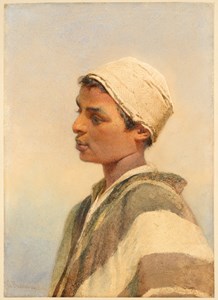 Born in Bavaria, Carl Haag was apprenticed to an uncle, a porcelain painter in Nuremberg, and also studied at a local drawing school. His earliest works were drawings of buildings in Nuremberg, as well as portraits and portrait miniatures, from which he earned a modest living. In 1847 he visited England to learn more about the English watercolour technique, studying at the Royal Academy Schools. It was during this period that a severe burn injury to his right hand led to the adoption of a looser, more spontaneous watercolour technique. (Prescott Hewett, the surgeon who operated on Haag’s hand, became the artist’s first important patron, and introduced the artist to the future Lord Penrhyn, who was to commission a number of Italian views from him.) A visit to Italy resulted in a number of genre and landscape subjects that were exhibited in London. In 1852, while sketching in the Tyrol, Haag met Charles, Prince of Leiningen, who was the half-brother of Queen Victoria, and the following year was invited to Balmoral by the Queen herself. Victoria commissioned a number of works from Haag, notably two landscapes of Morning in the Highlands and Evening at Balmoral, and he also produced portraits of members of the Royal Household; these works are all still in the Royal Collection and are housed in the Royal Library at Windsor Castle. The patronage of the royal family established Haag’s reputation, and he was elected a full member of the Old Water-Colour Society in 1855. Between 1854 and 1857 Haag travelled extensively throughout Europe, visiting Italy, Germany, Montenegro and Dalmatia. At the end of 1857, Haag decided to travel to Egypt and the Near East, where he was to remain for two years. He arrived in Cairo in January 1858, and in October made a trip to Greece and Turkey, before returning to Egypt in November, where he was joined by the artist Frederick Goodall, with whom he shared a studio. He remained in Cairo in the early months of 1859, making trips to Giza and Suez and producing drawings and sketches of the landscapes and the Bedouin people he encountered in the desert. In April Haag visited Jerusalem, where he stayed for about three months. There, at the special request of Queen Victoria, the Sultan granted the artist permission to paint the interior of the mosque of the Dome of the Rock; the first artist to be given access to this holy site. Haag then moved on to Nazareth, the Sea of Galilee, Damascus and Palmyra, where he arrived in October 1859 and remained for a month before returning to Cairo for the winter. In the spring of 1860 he returned to England, but returned to Egypt between 1873 and 1874. Haag kept two studios, one in England and the other in Germany, which gives some idea of his successful career. His studio in Hampstead was decorated in a Middle Eastern style, with objects gathered on his travels, while his home and studio in the Rhine town of Oberwesel was in a tower (known as the Rote Thürm, or Red Tower) overlooking the river. It was here that, at the age of eighty-three, Haag retired.