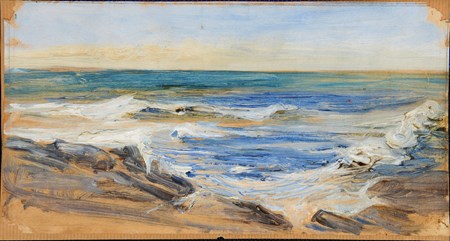 Almost nothing is known of the female artist responsible for this spirited oil sketch. Born Louise Guichard, she seems to have sometimes been also known as Louise Guichard or Guichard Faulcon. According to the inscription on the old backing sheet of the present work, she was a pupil of the watercolourists Henri-Joseph Harpignies (1819-1916) and Auguste Ravier (1814-1895); the latter lived and worked for much of his career around the town of Crémieu, where Faulcon was born and seems to have lived for most of her life. Faulcon is also thought to have been a pupil of a M. Lessore, possibly the portrait and genre painter Emile-Aubert Lessore (1805-1876), and upon her second marriage was known as Mme. Genin. Among the very few extant works by the artist is a still life of flowers in the Musée de Grenoble.