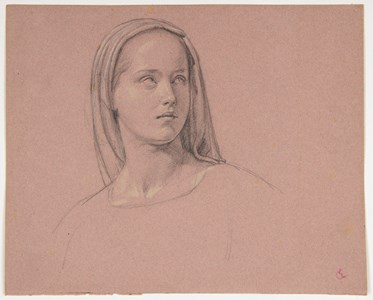 Wilhelm Eduard Daege enrolled in 1815 at the Akademie der Künste in Berlin, where he studied with Johann Gottfried Niedlich. Between 1823 and 1832 he trained in the studio of Karl Wilhelm Wach. He exhibited at the Academy from 1826 onwards, showing paintings of religious and allegorical subjects. He travelled to Rome and Naples between 1832 and 1833, and on his return to Berlin continued his association with the Academy, becoming a member in 1835 and, from 1838 onwards, teaching drawing there. His paintings of Biblical themes displayed the influence of the Nazarene artists, and he enjoyed a successful career. Among his public commissions were mural paintings for the Neues Museum, on which he worked from 1847 to 1855, and the chapel in the Berliner Stadtschlosses. In 1840 Daege was appointed a professor at the Academy, and between 1861 and 1874 served as Director of both the Akademie der Künste and the Nationalgalerie in Berlin.