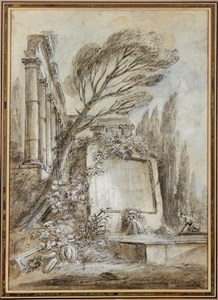 Relatively little is known of the life of Jean-Baptiste Lallemand. Born in Dijon, he settled in Paris in 1744, and the following year became a member of the Académie de Saint-Luc in Paris, where he exhibited landscape paintings in 1751 and 1764. Ther most significant influence on his artistic development, however, was the period that he spent in Italy. He arrived in Rome around 1747, possibly in the company of the painter Jean Barbault, and there achieved much success as a painter of Roman and Neapolitan views, several of which were sent to be exhibited in Paris. Among his important Roman patrons were the Pope and Cardinal Neri Corsini. On his return to France in 1764, Lallemand continued to work as a landscape painter, painting views of Paris, as well as scenes in Burgundy, the Franche-Comté and around Lyon, many of which served as illustrations for Jean-Benjamin de Laborde’s Voyage pittoresque en France, published between 1781 and 1800. He was in England in 1773, where he exhibited at the London Society of Artists, and also made a number of later visits to Italy. The 18th century collector and connoisseur Pierre-Jean Mariette noted of the artist that his landscapes ‘exécutées à guazze n’etoient pas sans merité.’ Late in his career Lallemand produced topographical drawings of views in the Franche-Comté, Burgundy and Lyon, intended as designs for prints.As a draughtsman, Lallemand produced numerous Roman views which echo the works of Giovanni Paolo Panini and, more obviously, Hubert Robert, who is almost certain to have met Lallemand in Rome.