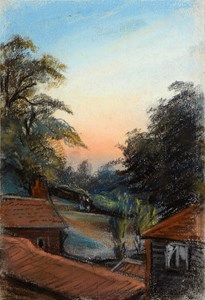 An aristocratic painter of portraits and landscapes, Louis-Auguste (later Baron) de Schwiter was born near Hanover in Germany, the only son of the French general Henry César Auguste Schwiter, whose title of Baron of the Empire he later inherited. Raised in Nancy, Schwiter studied law in Paris between 1823 and 1826, when he met and became a close friend of Eugène Delacroix, who was his first art teacher. Schwiter exhibited at the Salons between 1831 and 1859, showing mainly portraits and winning a gold medal in 1845. He visited England several times, exhibiting portraits at the Royal Academy on at least four occasions. He was also known as a connoisseur and collector of Old Master paintings and drawings (particularly of the 18th century French and Italian schools) and English mezzotint portraits. Indeed, Schwiter was among the first 19th century collectors to focus his interests on assembling a group of French and Italian drawings of the previous century; he owned several drawings by Giambattista Tiepolo, for example. Much of his collection was sold at auction in 1883 and 1886, by which time Schwiter had become blind in his old age. He died while on holiday in Salzburg. Schwiter is perhaps best known today, however, as the subject of one of Delacroix’s finest portraits. The two artists first met in 1825, shortly before Delacroix’s trip to England, and maintained a regular correspondence until the latter’s death. Delacroix’s famous full-length portrait of the young Schwiter at the age of twenty-one, painted between 1826 and 1830, is today in the National Gallery in London. Schwiter’s own portrait of Delacroix, completed a few years later, was exhibited at the Salon of 1833.