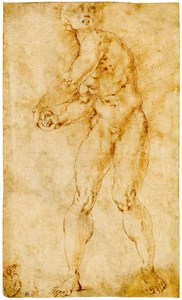 A pupil and assistant of Jacopo da Pontormo, Giovanni Battista Naldini inherited his master’s drawings after his death, according to the biographer Filippo Baldinucci. He is recorded in Rome in 1557, and upon his return to Florence around 1562 became a founder member of the Accademia del Disegno. He was employed as one of the artists assisting Vasari on the decoration of the Salone dei Cinquecento and the Studiolo of Francesco I in the Palazzo Vecchio. During the 1570’s Naldini painted four altarpieces for Santa Maria Novella and Santa Croce as part of Vasari’s renovation of these two Florentine churches. In the late 1570’s he returned to Rome, where he worked with Giovanni Balducci on the fresco decoration of the Altoviti chapel in the church of Santa Trinità dei Monti. The two artists also worked together in the cathedral of Volterra, where in 1590 Naldini painted an altarpiece of The Presentation of the Virgin. Naldini’s influence on later generations on Florentine artists was expressed largely through the work of such pupils as Giovanni Balducci, Domenico Passignano and Francesco Curradi.A prolific draughtsman, Naldini was steeped in the Pontormismo of his master, as Baldinucci notes: ‘[Naldini] disegnò bravamente, ed alquanto in sul gusto del suo gran maestro Jacopo da Pontormo, ma con un tocco più replicato, con matita sputata, e in sull’appiccature fortemente aggravata’. Bernard Berenson, in his magisterial survey of Florentine drawing, noted that ‘drawings by Naldini are numerous, and so full of spirit, so pictorial, so lively in execution that an hour spent looking over his albums at the Uffizi must count among the pleasures of the student of cinquecento Florentine draughtsmanship.’