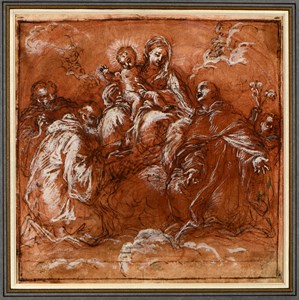 Giuseppe Passeri studied with his uncle, the painter and biographer Giovanni Battista Passeri, before entering the studio of Carlo Maratta in Rome. He soon became one of Maratta’s favorite students, working with him on a number of significant projects. His style, however, was less indebted to the master than most of Maratta’s followers. Passeri’s earliest known dated paintings were executed for the Palazzo Barberini in Rome in 1678, and he was to work in the city for almost his entire career. Elected to the Accademia di San Luca in 1693, he received numerous commissions for religious pictures, such as a Baptism of Constantine painted for the Albani chapel in the church of San Sebastiano fuori le Mura. Other Roman churches for which Passeri painted altarpieces include Saint Peter’s, Santa Maria in Vallicella, San Francesco a Ripa, Santa Maria in Aracoeli, Santa Caterina a Monte Magnanapoli and Santa Croce in Gerusalemme, while he also painted an important large altarpiece of Christ in Glory with Saints for the Duomo in Fermo, as well as elaborate ceiling frescoes for the presbytery of the Duomo at Viterbo, completed in 1699 but destroyed during the Second World War. Passeri worked for Pope Clement VII, who in 1700 appointed him 'pittore della camera apostolica', and also received commissions for mural projects to decorate the palaces and villas of a number of Roman families. In addition to his large-scale work, he produced cabinet pictures, and was active as a portrait painter. A very large collection of drawings by Passeri, numbering over 1,100 sheets and representing some two-thirds of his extant oeuvre as a draughtsman, is in the collection of the Museum Kunstpalast in Düsseldorf, while other significant groups of drawings by the artist are in the Royal Collection at Windsor Castle and the Albertina in Vienna.