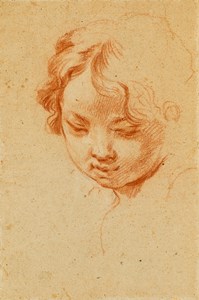 A pupil of Francesco Albani, Carlo Cignani was among the leading painters in Bologna in the later 17th century, enjoying a stature akin to that of Carlo Maratta in Rome. He was the first director of the Bolognese academy, the Accademia Clementina, and enjoyed the patronage of the Medici and Farnese families, as well as such significant foreign collectors as Prince Johann Adam of Liechtenstein and Johann Wilhelm Wittelsbach, the Elector Palatine. Something of a perfectionist as a painter, Cignani worked in a very slow and painstaking manner, particularly in the field of fresco painting, in which he was highly regarded by his contemporaries. Among his most important fresco commissions was a cycle of mythological subjects ordered by Duke Ranuccio II Farnese in 1678 for the Palazzo del Giardino in Parma, a project which had been left incomplete by Agostino Carracci some seventy-five years earlier. In completing the work, Cignani was assisted by his chief pupil and disciple, Marcantonio Franceschini. Another significant commission was the extensive fresco decoration of the dome of the Cappella della Madonna del Fuoco in the Duomo at Forlì, which was begun in 1683. Cignani worked on the project - inspired by Correggio’s famous cupola frescoes in the Duomo in Parma - for over twenty years, eventually completing the decoration in 1706. He had transferred his studio to Forlì by 1685, and lived and worked there for the remainder of his career. Apart from Franceschini, Cignani’s pupils included Giuseppe Maria Crespi, Federico Bencovich and Giovanni Camillo Sagrestani.Drawings by Carlo Cignani are rare. That his drawings were much admired by contemporary connoisseurs is seen in the fact that his large-scale cartoons for the Palazzo del Giardino in Parma were acquired by Consul Joseph Smith for the Royal Collection and are today at Hampton Court in London.