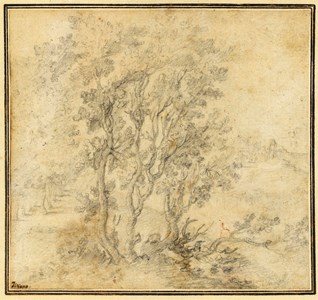 The son and pupil of the painter Alessandro Allori, Cristofano Allori became one of the leading artists of the early Baroque in Florence. His earliest known works are portrait commissions of members of the Medici family, painted in the 1590’s and indebted to the example of the paintings of his father and of Bronzino. From 1600 Allori came under the influence of such artists as Ludovico Cigoli and Domenico Passignano, whose work was a rejection of the hard, cold style of Bronzino and the elder Allori, and moved towards a more naturalistic and less mannered style of painting. Around this time Cristofano left the studio of his father and began working with Gregorio Pagani, as well as assisting Cigoli on the decoration of some rooms in the Palazzo Pitti, and Cigoli’s influence was to be particularly pervasive on the young man’s work. The early years of the 17th century found the artist also much admired as a portrait painter, his work in this field typified by the Portrait of Bernardo Davanzati of c.1605 in the Ashmolean Museum in Oxford. From 1605 until his death in 1621, Allori was one of the most successful painters in Florence, counting among his patrons the Grand Duke Cosimo II de’ Medici and other members of the Ducal court. Among the significant works of this period were a ceiling painting of The Embarkation of Marie de’ Medici in the church of the Cavalieri di Stefano in Pisa, completed in 1605, and a massive Resurrection for the cathedral of Pistoia, on which he worked between 1602 and 1610. The last decade of his career found the artist painting religious easel pictures characterized by an intense emotionalism, graceful movement and superb draughtsmanship, notably the Judith with the Head of Holofernes of c.1615, in which the severed head is a self-portrait. Among Allori’s pupils were Giovanni Battista Vanni and Zanobi Rosi.