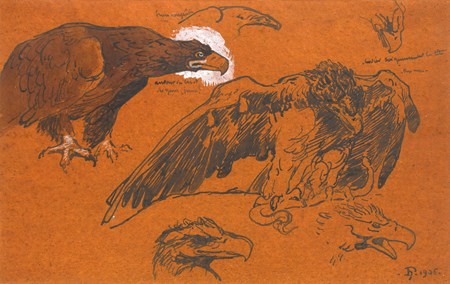 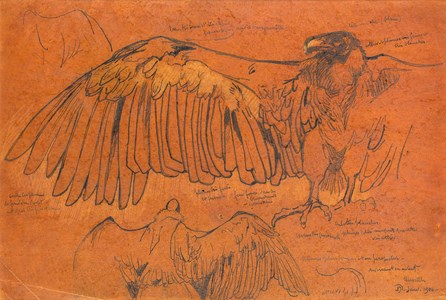 A painter, illustrator and engraver, Henri Deluermoz was a pupil of Alfred Roll and Gustave Moreau. He became one of the finest animal painters of his day, with a particular penchant for depictions of wild animals. He also painted Provençal landscapes, equestrian and bullfight scenes, and produced designs for tapestries, mural decorations, and book illustrations. (Among the books he illustrated were editions of Rudyard Kipling’s Jungle Book, Henri de Montherlant’s Les Bestiaires, and Louis Pergaud’s Histoires de bêtes.) Deluermoz did not send any paintings to the Salon until 1909, when he was already in his thirties, although thereafter he exhibited there regularly, and also showed at commercial galleries in Paris between 1913 and 1919. At the Salon of 1911, a large painting of a stampede of wild animals before a flood elicited much praise from critics, with Arsène Alexandre writing in Le Figaro, ‘Mais quelle connaissance de l’animalité dans cette grande peinture! Quelle vérité dans l’observation des mouvements!’, while another critic wrote of the painting ‘Each creature is represented in its own character, and in motion true to life, and one takes pleasure in studying in turn the elephant and the buffalo in their heavy flight, the panther bounding along, the deer leaping lightly forward – all this evolved in the mind of a Kipling of the brush.’ An exhibition of Deluermoz’s work at the Galerie Reitlinger in 1913 led to the purchase by the State of a large drawing of a bullfight. An exhibition of his animal drawings was held at the Galerie Le Goupy in Paris in 1926, while a larger and more comprehensive exhibition of paintings and drawings by the artist was mounted at the Galerie Charpentier in Paris in 1939.