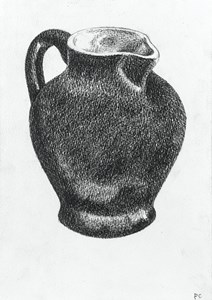 Patrick Caulfield began attending evening classes in drawing and painting at the Harrow School of Art during his National Service in the mid 1950’s. He entered the Chelsea School of Art in 1956, first studying graphic design before transferring to the painting department. In 1960 he was admitted to the Royal College of Art, where his fellow pupils included R. B. Kitaj, David Hockney and Allen Jones, all of whom had enrolled the previous year. While still at the Royal College of Art, Caulfield’s work was exhibited at the Young Contemporaries exhibitions in London in 1961, 1962 and 1963. His paintings also figured prominently in the Whitechapel Art Gallery’s New Generation exhibition in 1964, alongside works by Hockney, Jones, Patrick Procktor, John Hoyland and Bridget Riley, among others. At this time Caulfield began to produce the first of many screenprints, one of which was included in his first one-man exhibition in London in 1965, and printmaking was to become an important aspect of his artistic production. In 1967 the Tate Gallery purchased a painting from his second London exhibition, and the following year Caulfield joined the Waddington Galleries, where he was to exhibit for the remainder of his career. Apart from paintings and prints, Caulfield also produced designs for posters, wall hangings, book covers, tapestries, ceramics and murals, as well as sets and costumes for stage productions at the Royal Opera House at Covent Garden. A reserved and introspective man, Caulfield worked very slowly, and throughout the last thirty years of his career only rarely produced more than two or three paintings and a few prints each year. At the end of 2002 Caulfield was found to be suffering from cancer of the mouth and throat, and two operations left him unable to speak. Despite his frail state, he was able to complete one large major painting in 2004 before his death the following year.