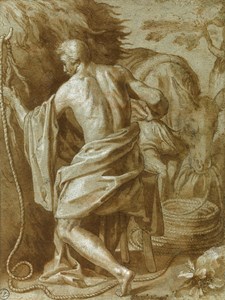 Born into a family of painters and decorators in Verona, Jacopo Ligozzi spent almost the entirety of his long career in Florence, where he arrived in 1575, summoned by the Grand Duke Francesco I de’ Medici. Trained as a miniaturist (it is interesting to note that even in his large paintings he often signed his name as ‘Jacopo Ligozzi miniator’), he was admitted into the Florentine Accademia del Disegno in 1582. Ligozzi worked as court artist for four successive Medici Grand Dukes, from Francesco I to Ferdinando II, executing numerous designs for tapestries, furniture, glass, jewellery, pietra dura and metalwork. According to Medici inventories, however, much of his work took the form of small-scale paintings, often of a devotional or emblematic nature. Ligozzi’s first important public commissions came in the 1590’s, notably two monumental historical scenes, painted on slate, for the Salone dei Cinquecento of the Palazzo Vecchio, completed in 1592. He painted altarpieces for such local churches as Santa Maria Novella, San Marco and San Giovannino degli Scolopi. He also painted altarpieces for churches elsewhere in Tuscany; in Bibbiena, Poppi, Arezzo and at Monte Oliveto Maggiore, and returned briefly to his native Verona around 1591. Ligozzi’s best-known works as a painter are, however, a series of seventeen lunette frescoes of scenes from the life of Saint Francis for the church of Ognissanti in Florence, completed in 1600. The artist became increasingly devout as he grew older, and among his late altarpieces is a Martyrdom of Saint Lawrence for the Florentine church of Santa Croce, painted in 1611. His last Medici commission was for a series of four paintings of the Passion of Christ, painted between 1621 and 1622 for Maria Maddalena of Austria, mother of the young Grand Duke Ferdinando II and co-regent during his minority.Ligozzi was a superbly gifted draughtsman, and was esteemed as such by his contemporaries. As one modern scholar has noted, ‘The most authentic, coherent vein of Jacopo’s work is expressed in his graphic output: he was a born draughtsman, a draughtsman of immense precision, of drawings so meticulous as to occasionally become for the artist and his commissioners works of art for their own sake, and sought after as such.’ It is interesting to note that, when Ligozzi was engaged as a court artist by the Medici Granducal court in the early 1620’s, the terms of his employment were tied to his output as a draughtsman. As the document noted, ‘If there is no occasion to employ him, have him do drawings to keep him in the gallery…just have him draw, leave it up to him, whatever he does he will produce sheets worth keeping, and for that very reason we want him at court.’Ligozzi’s drawings exhibited a wide range of subject matter that included religious scenes, allegories, designs for glassware and costume studies, as well as literary subjects, notably a series of episodes from Dante’s Divina Commedia, drawn between 1587 and 1588. In keeping with Grand Duke Francesco I’s interest in natural history, Ligozzi also produced a large number of scientific drawings depicting specimens of fishes, birds and flowers in the Granducal collections. An album of such drawings is recorded in the Medici Guaradroba in 1619, and a large number of natural history drawings by Ligozzi are today in the Uffizi; some of these were also used to illustrate the treatises of the Bolognese naturalist Ulisse Aldovrandi. Ligozzi also provided a number of designs for printmakers such as Agostino Carracci, Philippe Thomassin and the chiaroscuro woodcutter Andrea Andreani. Whatever the subject, Ligozzi’s drawings are invariably highly finished, often heightened with touches of gold, and combine a meticulous technique with a miniaturist’s attention to detail.