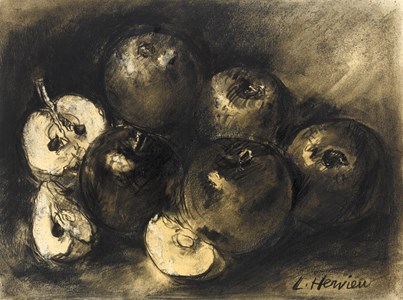 An extraordinary figure in the artistic and literary circles of Paris in the first half of this century, Louise-Jeanne-Aimée Hervieu took up painting around 1905. She participated in the Salon des Indépendants in Paris, and in 1910 had a one-woman exhibition at the Galerie Eugène Blot in Paris. After this, however, she abandoned painting at the insistence of her parents, although she continued to make charcoal drawings and pastels, often of still lives and interior scenes. She soon came to the attention of the critic Félix Fénéon, who in 1917 organized the first of several exhibitions of her drawings at the Galerie Bernheim-Jeune. Fond of intense chiaroscuro techniques, Hervieu achieved remarkable effects of mood and mystery in her drawings. She was friendly with such artists as Félix Vallotton, Pierre Bonnard and Edouard Vuillard, and also provided illustrations for several books, including Charles Baudelaire's Les fleurs du mal in 1920 and Le spleen de Paris in 1922. Hervieu’s eyesight gradually deteriorated, the result of a case of inherited chronic meningitis, and by the early 1920's she had abandoned working in colour. By 1927 she had grown almost completely blind and had stopped drawing altogether; the catalogue of her retrospective exhibition at Bernheim-Jeune that year was prefaced by a statement intended by the artist as a sort of artistic ‘farewell’. She had by then turned to writing, and in 1925 her book L'âme du cirque was published, accompanied by illustrations by Bonnard, Maurice Denis, Picasso, Georges Rouault and André Lhote. In 1936 her novel Sangs won the Prix Fémina; this was followed by Le crime, published in 1937, Le malade vous parle in 1943 and La rose de sang in 1953.