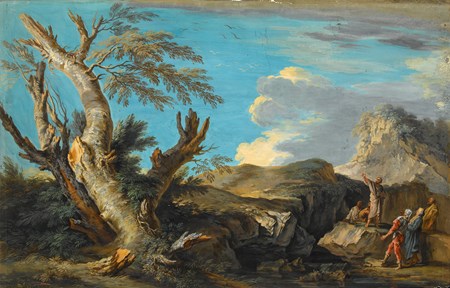 Born in France, Joseph Goupy worked as a painter, draughtsman and printmaker in England, where he had settled by 1711, becoming one of the first members of Sir Godfrey Kneller’s Academy of Painting and Drawing in London. Goupy made a particular specialty of small-scale copies in gouache of Old Master paintings; these were greatly admired and avidly sought by collectors and connoisseurs. (Several of his landscape gouaches – both original compositions and copies after the work of other artists – were also published as prints.) Goupy’s gouache technique may have been influenced by the work of Marco Ricci, whom he met in England and with whose support he was engaged on the painting of sets for the Royal Academy of Music in the 1720’s. Goupy became a close friend of the composer George Frideric Handel, and decorated sets for several of his operas. He was employed by King George I on the restoration of four of Andrea Mantegna’s series of paintings of the Triumphs of Caesar, for which he was paid £200, and in 1736 was appointed ‘Cabinet Painter’ and curator to Frederick, Prince of Wales. Among the contents of Leicester House, the Prince’s London residence, were noted several gouaches after Old Master paintings by Goupy, who also decorated the Chinese Pavilion at Kew Gardens. The artist is only rarely documented after the Prince of Wales’s death in 1751, however, and died in poverty some twenty years later.