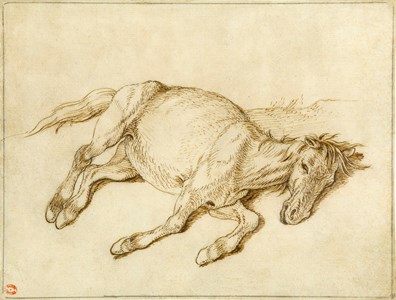 Born into an aristocratic Piedmontese family, Sinibaldo Scorza entered the studio of Giovanni Battista Paggi in Genoa in 1604. As an independent master, he made a speciality of small canvases of Biblical or mythological scenes, often crowded with animals, such as the Orpheus Singing to the Animals, known in several versions. He also painted landscapes and pastoral scenes; the ‘capricciose bizzarrie rustiche, e pastorali’ praised by his biographers Raffaele Soprani and C. G. Ratti, who note that such works were in great demand among Genoese collectors. Scorza also painted a handful of religious subjects, notably an Assumption in the church of San Giovanni Battista in his native town of Voltaggio, completed in 1617. Between 1619 and 1625 he worked in Turin as court painter to Carlo Emmanuele, Duke of Savoy. Following a brief visit to Rome, he returned in 1627 to Genoa, where he may have taken over Paggi’s workshop after the master’s death. Near the end of his career, as Soprani and Ratti note, Scorza took up the practice of etching, and it is also during this last Genoese period – between 1627 and his death in 1631 - that he may have had the young Giovanni Benedetto Castiglione as an apprentice in his studio. Certainly his landscape and animal paintings were a particular influence on Castiglione, who may also have learned the rudiments of etching from the elder artist.Scorza was greatly admired as a draughtsman. His drawings were collected by the Duc d’Orléans and the Genoese art historian and biographer Carlo Giuseppe Ratti, among others, while the 19th century Genoese sculptor Santo Varni, who formed a significant collection of drawings by Ligurian artists, owned nearly seventy drawings by Scorza. Most of the artist’s surviving drawings are today in the collection of the Palazzo Rosso in Genoa, while an important sketchbook, dated 1607 and containing around four hundred drawings by Scorza, is in the Muzeum Narodowe in Cracow.