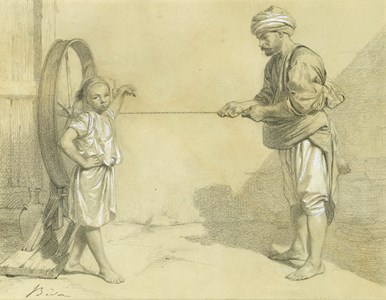 Regarded in his day as one of the finest draughtsmen of the 19th century, Alexandre Bida abandoned a career as a teacher of classics to study with Eugène Delacroix in Paris. It was the influence of Delacroix, as well as the work of Gabriel-Alexandre Decamps and Auguste Raffet, that led Bida to be interested in Orientalist themes and subjects. An early visit to Syria and Constantinople instilled in him a fascination with Near Eastern subjects, and at his Salon debut in 1847 he showed two highly finished drawings of A Cafe in Constantinople and A Cafe on the Bosphorus; both works were purchased by the State. Bida visited Egypt in 1850, and Greece, Turkey and the Crimea in 1855, and continued to exhibit regularly at the Salons, showing almost nothing but finished drawings. In a letter of 1870, the painter Eugène Fromentin praised Bida’s draughtsmanship, noting that ‘his drawings are paintings without colour or engravings that did not pass under the burin, but have the same value and weight.’ Bida also undertook a number of projects for book illustrations, notably a series of the collected works of Molière in 1860 and of Alfred de Musset in 1865, as well as an extensively illustrated Bible published by Hachette in 1875. He was also a prolific lithographer. Large groups of drawings by the artist are today in the Louvre and the museum at Pontoise.That Bida’s drawings were widely praised even outside France can be seen in the comments of an anonymous critic, writing in an English periodical of 1859, who noted that ‘Amongst the most noteworthy things of the kind of our day are M. Alexandre Bida’s masterly crayon drawings. They combine in a remarkable degree boldness and freedom of outline with a soft and brilliant finish, producing the effect of colour with colourless materials. But what is still more essential is the ripe study and appreciation of character, and the keen eye for the picturesque, displayed by the artist on all occasions. His sphere of action has hitherto been chiefly confined to Oriental climes, from which he has brought home some beautiful works, but we have no doubt that when he chooses to apply himself to other themes he will acquit himself in a way to increase the renown he has already attained.’