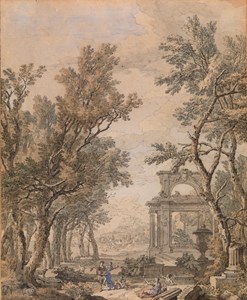 A painter, draughtsman and engraver, Isaac de Moucheron was the son and pupil of the landscape painter Frederick de Moucheron. While both father and son depicted much the same type of Italianate views, as Leo van Puyvelde noted of Isaac, ‘his work may be distinguished from that of his father by its loftier spirit and finer execution.’ Isaac de Moucheron was in Italy between 1695 and 1697, and on his return to Holland developed a successful career as a painter of large, decorative wall paintings for houses in Amsterdam. He made a particular speciality of Italianate landscapes, classical or Arcadian views and scenes of imaginary parks and formal gardens. In many of these decorative projects for private homes he worked in collaboration with the figure painter Jacob de Wit, while towards the end of the 1730’s he began to design the façades of buildings. Moucheron also painted a number of cabinet pictures of views of Roman and Italianate landscapes indebted to the examples of Claude and Gaspard Dughet. His success as an artist, and the popularity of his drawings and mural decorations, earned him an annual income of around 1,500 guilders.As a draughtsman, Moucheron produced finished drawings both in watercolour and in pen and ink; works which were much in demand by collectors. Subjects depicted include topographical views, Arcadian landscapes, scenes in the manner of earlier Dutch artists such as Nicolaes Berchem and, in particular, fantasy views of parks and gardens, known as hofgezichten. At the time of Moucheron’s death some five hundred drawings remained in his studio and were dispersed at auction in December 1744, while many more must have been sold to collectors in his lifetime. Nevertheless, only around four hundred drawings by the artist survive today, and only relatively few of these are signed or dated.