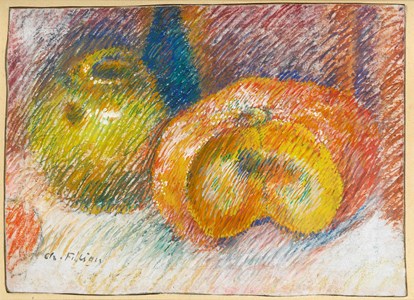 Among the more eccentric of the artists in the circle of Paul Gauguin in Brittany in the early 1890’s, Charles Filiger was born in Alsace and studied at the Atelier Colarossi in Paris. He exhibited some watercolours at the Salon des Indépendants in Paris in 1899, and by the summer of the following year had settled in the Breton village of Le Pouldu, where he befriended several of the artists working there, including Gauguin, Paul Serusier, Emile Bernard, Claude-Émile Shuffenecker and the artists of the Nabis group. He also met Comte Antoine de la Rochefoucault, who became one of his most important patrons and paid him a yearly pension of 1,200 francs during the 1890’s, in exchange for his paintings. Filiger was a deeply religious man (indeed, one modern scholar has described him as ‘a Christian mystic’1), and his work – usually on a small scale - is often of a religious or mystical nature. He had a particular admiration for Byzantine art and the work of the Italian primitives, and indeed several critics likened the figures in his paintings to those of Giotto. His interest in such earlier art, and in the simplification of form and colour in his own work, led eventually to the geometrical and abstract nature of a series of watercolours that he described as ‘notations chromatiques’. Filiger exhibited only infrequently in Paris throughout his relatively brief career; most significantly at the Salon des Indépendants in 1889 and 1890 and the first Salon de la Rose + Croix in 1892. In 1894 the critic Alfred Jarry published an article on Filiger in the review Le Mercure de France, and the same year the artist participated in a group exhibition at the gallery Le Barc de Boutteville. An exhibition at the Galerie Durand-Ruel in 1899 was to be his last, however, as after this he seems to have abandoned Paris, living a reclusive life in Brittany with a family by the name of Le Guellec until his death by suicide in 1928. His work remained almost completely forgotten long after his death, until its eventual rediscovery by the Surrealist writer André Breton.