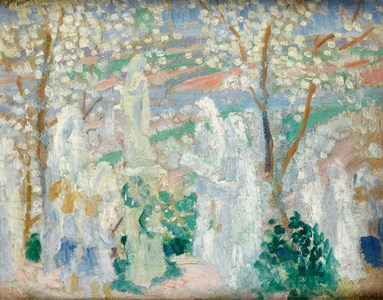 Arguably better known as a theorist and critic than as a painter, Maurice Denis began his career as a member of the group of young artists known as the Nabis. Formed in Paris in 1889, the Nabis artists - including Paul Sérusier, Pierre Bonnard, Edouard Vuillard, Ker-Xavier Roussel and Félix Vallotton, who were all at the beginning of their careers - were united by a desire to develop a new, more expressive pictorial language in which form and colour were as important in their own right as subject matter. Denis was established as the leading theorist of the movement, and published a large number of articles in avant-garde reviews. After around 1900, however, Denis’s work became more classicizing in manner. He exhibited at the Bernheim-Jeune, Le Barc de Boutteville and Druet galleries, the last becoming his primary dealer in 1904. In 1908 he purchased a villa (called ‘Le Silencio’) in the fishing village of Perros-Guirec on the northern coast of Brittany, where he worked for the rest of his career. Much of Denis’ finest work is in the form of large-scale decorative murals, commissioned both for private houses - such as those of the Prince de Wagram, Etienne Moreau-Néaton and Ernest Chausson in Paris - and public buildings. One of the most important examples of the latter is the History of Music cycle in the Théâtre des Champs-Elysées on the Avenue Montaigne in Paris, decorated by Denis in collaboration with Vuillard and Roussel in 1912. A fervent Roman Catholic, Denis found particular inspiration in Biblical imagery and subject matter, and religious works occupied much of his later career. Indeed, in 1919 he was instrumental in establishing the Ateliers d’Art Sacré; studios that trained young painters in the principles of religious painting and decoration, as well as producing designs for mosaics, stained-glass windows, church furniture and ornament. Denis also produced a large number of book illustrations and lithographs.