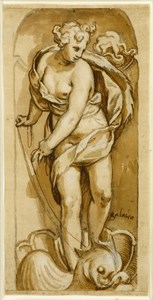 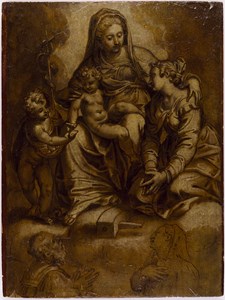 One of the most significant artists working in Verona in the 16th century, Paolo Farinati was active as a painter, printmaker, architect and sculptor. He was the son and pupil of a painter and is also thought to have studied with Niccolò Giolfino. Although few documents survive for his life, a chronology of his long career is relatively simple to establish, since many of his surviving paintings are dated and also because, from 1573 until his death, he recorded his commissions in an account book that survives today. His first documented work is an altarpiece of Saint Martin and the Beggar of 1552, commissioned by Cardinal Ercole Gonzaga for the cathedral in Mantua. (At the same time, the Cardinal also commissioned paintings for the cathedral from a number of other leading painters from Verona, including Paolo Veronese, Domenico Brusasorci and Battista Agnolo del Moro.) Between 1556 and 1558 Farinati worked at the church of Santa Maria in Organo in Verona, and he continued to work in his native city for most of the rest of his career. Frescoes in the Cappella Marogna in the church of San Paolo, painted in 1566, show the influence of Veronese, whose altarpiece in the church was flanked by Farinati’s murals. In the early 1570’s Farinati painted a cycle of frescoes of mythological and allegorical subjects in the Palazzo Giuliari in Verona, and soon afterwards embarked on an important series of paintings and frescoes for the Veronese church of Santi Nazaro e Celso. His style remained fairly constant throughout his mature career, which was largely spent painting works for churches in Verona, as well as frescoes for villas and palaces in the city and the surrounding countryside. He painted at least fifteen facade decorations for palaces in Verona, although almost all of these have been destroyed by the effects of exposure and pollution. By the last quarter of the 16th century Farinati was firmly established as the leading artist in Verona, heading a large and active workshop whose members included his sons Orazio and Giambattista.It is as a draughtsman that Paolo Farinati is best known today. He was fairly prolific, and around five hundred drawings survive; these are generally executed in pen and brown wash on coloured paper, and often with a liberal use of white heightening. Farinati kept many of his drawings in albums, and his oeuvre includes numerous studies for altarpieces, easel pictures and fresco decorations, as well as a handful of designs for prints and architectural projects. Most of his drawings are highly finished, and many have the appearance of having been executed as autonomous works of art. Many of his finished drawings were, indeed, acquired by local collectors. Carlo Ridolfi noted of Farinati, ‘his drawings are greatly admired, and are collected by connoisseurs...His drawings, executed on tinted paper with touches of watercolour and white heightening, were so numerous that it would be impossible to recount their subjects, and many more exist in prints, of which a good number have been collected by amateurs [dilettanti], and brought to various places...’ Farinati’s drawings were also known to have been greatly admired by fellow artists, including Giorgio Vasari and Annibale Carracci, while Rubens owned several of his drawings. One of the largest extant collections of drawings by the artist is today in the Louvre, while another significant group, numbering around fifty sheets, is in the Royal Collection at Windsor Castle.