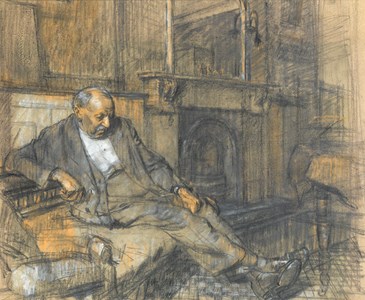 In 1926, at the age of fifteen, Ruskin Spear won a scholarship to the Hammersmith School of Art, followed four years later by a scholarship to the Royal College of Art. There, under the direction of Sir William Rothenstein, he was encouraged to regard draughtsmanship as the foundation of his art. He was also strongly influenced by the paintings of Walter Sickert and the artists of the Camden Town Group. Graduating in 1934, he took up a position as a teacher at the Croydon School of Art the following year. A bout of polio as a child left him ineligible for active service in World War II, and he spent the war years teaching at various art schools in London, including Hammersmith, St. Martin’s and the Central School of Art. A keen jazz pianist, Spear played in several clubs and dance halls, and contributed drawings to Vogue magazine. Elected an Associate member of the Royal Academy in 1944, he served as a tutor at the Royal College of Art beginning in 1948 and continuing for almost thirty years, alongside such colleagues as Carel Weight, Rodrigo Moynihan, and John Minton. Among Spear’s students at the Royal College of Art were David Hockney, R. B. Kitaj and Allen Jones.A one-man exhibition at the Leicester Galleries in 1951 was followed in 1954 by his election to the Royal Academy as a full Academician. Greatly admired as a portrait painter, Spear received numerous commissions for portraits of such figures as Winston Churchill, Sir Laurence Olivier, Harold Wilson, L. S. Lowry and others. He also painted urban landscapes and interior genre scenes, usually set in his familiar neighbourhood of Hammersmith and West London. In 1957 his work was included in an exhibition of British painting, entitled Looking at People, held at the Pushkin Museum in Moscow, while in 1959 he designed murals for the Cricketer’s Bar on the ocean liner Canberra. A retrospective exhibition of his work was held at the Royal Academy in 1980.At his death, it was written of Ruskin Spear that ‘He always backed his expert brush with strong draughtsmanship and a fine grasp of formal composition, and these qualities allowed him to give full rein to his sure tonality and to his rich and often daring sense of colour. A very English artist, he was nevertheless English in the Sickertian tradition and a felicitous exponent of la bonne peinture. His scenes of working-class life and his digs at the Establishment are as much those of a Londoner as were Sickert’s raucous music halls, and his painterly ideals are rooted in Manet and Degas.’