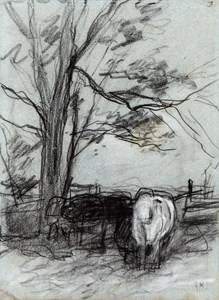 Anthonij (Anton) Mauve studied in Haarlem with the animal painters Wouter Verschuur and Pieter Frederik van Os, and in the summer of 1858 paid the first of several visits to the artist’s colony at Oosterbeek, in the province of Gelderland. In his early work Mauve concentrated on paintings of cows in a landscape, although he also painted horses and, later, sheep and shepherds, for which he became best known. His paintings and finished watercolours found a ready market through the French art dealers Goupil, who had opened a branch in The Hague, and in 1871 Mauve chose to settle in the same city, which was surrounded by a varied range of picturesque landscape motifs, including meadows, dunes, woods and polders. He became a leading member of a group of artists who came to be known as the Hague School, which included Johannes Bosboom, Paul Gabriël, Jozef Israëls, Jacob, Mathijs and Willem Maris, Hendrik Willem Mesdag, Willem Roelofs and Jan Hendrik Weissenbruch, among others. These artists drew inspiration from the landscapes and peasant communities around The Hague and the nearby coastal town of Scheveningen. From about 1865 onwards, Mauve only rarely dated his work. In 1876 he was one of the founder members, alongside Mesdag and Willem Maris, of the Hollandsche Teeken-Maatschappij (Dutch Drawing Society). In 1885 he left The Hague to settle in the town of Laren, where he worked for the next few years. It was during this period that his paintings of meadows with sheep became immensely popular in England and America. Although Mauve suffered from regular bouts of serious depression, he was also prone to periods of manic artistic activity, and could be very productive. Apart from a brief trip to Germany for a health cure in 1873, he never seems to have travelled outside Holland. Among his pupils was, albeit very briefly, Vincent Van Gogh, who was a cousin of Mauve’s wife.