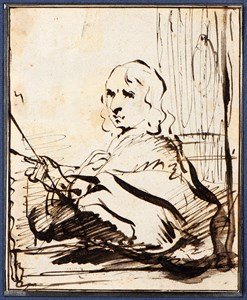 Govert (or Govaert) Flinck was a pupil of the Mennonite preacher and artist Lambert Jacobsz in Leeuwarden, alongside Jacob Backer, who was a few years older. The two young artists then travelled together to Amsterdam, where Flinck worked in the workshop of the art dealer Hendrick Uylenburgh. It was probably there that he met Rembrandt, who also worked for Uylenburgh. Flinck spent about a year in Rembrandt’s studio, probably between 1635 and 1636, working alongside artists such as Ferdinand Bol, before becoming an independent master. While his paintings of the mid-1630s and early 1640s are much indebted to Rembrandt’s manner (indeed, several of his portraits were once attributed to the master), by the later 1640s he had begun to paint in a lighter, more classical and courtly style and had secured a reputation as one of the foremost portrait and history painters in Amsterdam. Flinck received a number of important public commissions in the 1640s, and also was much in demand as a portrait painter. By the end of the 1650s he was enjoying a reputation as arguably the leading society painter in Amsterdam, culminating in a commission for twelve history paintings to decorate the Amsterdam Town Hall. His sudden death in 1660, at the age of just forty-five, came at the very height of his highly successful and lucrative career.As a draughtsman, Govert Flinck produced around 120 drawings; mainly individual life studies of both nude and clothed male or female figures, drawn in black and white chalk on blue paper, as well as landscapes, Biblical scenes and portraits. While most of Flinck’s extant drawings are in black chalk (and, occasionally, red chalk), drawings in pen and ink - both with and without wash - are relatively few in number. Almost all of Flinck’s surviving drawings can be dated to the years following his apprenticeship with Rembrandt. His earliest signed and dated drawing - a standing man in Eastern costume, drawn in 1638 - is in fact his only known dated drawing from the decade of the 1630s.