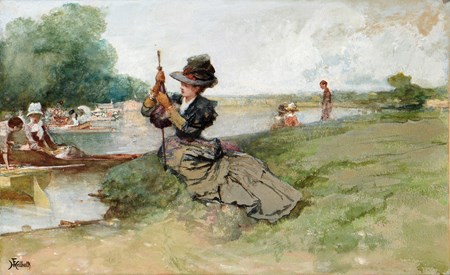 The son of a rabbi, Ferdinand Heilbuth lived and studied in Antwerp, Munich, Düsseldorf and Rome before settling in Paris. He entered the studio of Paul Delaroche, remaining there after it was taken over by Charles Gleyre. He made his debut at the Salon in 1853, and his early work consisted of genre pictures and historical paintings, the latter often depicting episodes from the lives of earlier artists. These works, exhibited at the Paris Salons to great popular success, included such paintings as Rubens Introducing Brouwer to his Wife and The Son of Titian. He later abandoned such subjects, however, in favour of paintings inspired by a long stay in Rome, and in particular the inner workings and day-to-day life of the Vatican. Obliged to leave Paris during the Franco-Prussian war, Heilbuth worked in England between 1870 and 1872, painting scenes of such leisurely plein-air pursuits as croquet, lawn tennis and boating on the Thames. He exhibited at the Royal Academy, and among his patrons was Sir Richard Wallace, who purchased four of his paintings which are today in the Wallace Collection in London. Heilbuth returned to Paris in 1874 and became a naturalized French citizen four years later. The year after Heilbuth’s death, a sale of the contents of the artist’s studio was held in Paris; the auction included nearly 150 paintings and oil sketches, as well as 69 watercolours and 84 drawings.