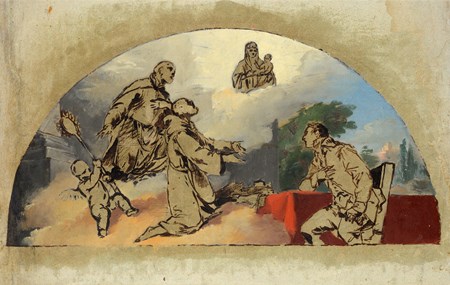 ‘One of the most enchanting artists of the Bolognese Barochetto’, in the words of one scholar, Pietro Fancelli received his early training in the Venetian studio of his father, the decorative painter Petronio Fancelli, before returning to his native Bologna in 1784 and enrolling in the Accademia Clementina. He maintained a close relationship with the Accademia throughout his career, becoming a member in 1791 and continuing to teach drawing there after its reorganization as the Accademia Nazionale di Belli Arti in 1804. Fancelli established a reputation as a specialist in theatrical design and scenography, and was active as a portrait and decorative fresco painter. He also produced a number of paintings for local churches, such as the Stigmatization of Saint Francis in the church of San Francesco in Faenza, painted in 1790, a Saint Thomas of Villanova Distributing Alms in the church of San Giacomo Maggiore in Bologna, completed in 1827, and a Saint Anne and the Virgin for Santa Maria Maggiore in Bologna, painted in 1829. Throughout his career, Fancelli often worked in tandem with the landscape painter Vincenzo Martinelli, producing grand decorative cycles in numerous palaces and villas in and around Bologna. Among the palaces in Bologna where Fancelli worked were the Palazzo Tanari, the Palazzo Hercolani, the Palazzo Aldini Sanguinetti and the Palazzo Arcivescovile, while his work was also to be found outside the city, at the Villa Contri, the Villa Pallavicini Malpighi, the Villa Sorra, and elsewhere. Among his other public commissions were the design and painted decoration of several tomb monuments for the Certosa of Bologna, for the Magnani, Borghi, Malvezzi and Bargellini families, as well as the decoration of the tomb of his friend and artistic collaborator Martinelli, who died in 1807. Fancelli also took part in the decoration of the Teatro Comunale in Bologna, following its renovation in 1820. A manuscript autobiography, today in the Biblioteca Comunale in Bologna and as yet unpublished, lists a total of 245 works by the artist, executed between 1785 and 1837.