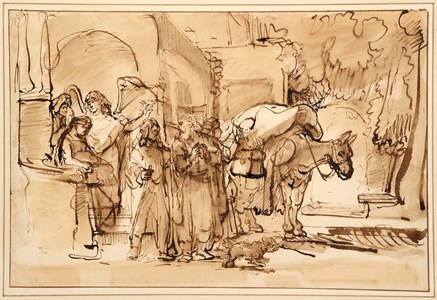 Ferdinand Bol was trained in his native Dordrecht, probably in the studio of Jacob Gerritsz. Cuyp, before moving to Amsterdam around 1536 and entering the workshop of Rembrandt. He remained in the Rembrandt studio until 1640, when he began working as an independent painter; it is from this year that his first dated painting is known. Like his master, Bol painted Biblical, mythological and allegorical subjects, as well as undertaking portrait commissions, and his style remained close to that of Rembrandt throughout the 1640s. He became a citizen of Amsterdam in 1652, at the same time as Govert Flinck. The 1650s and 1660s found the artist engaged on a number of significant commissions for public works, such as the decoration of the Amsterdam City Hall and the Admiralty, as well as painting large group portraits of members of various guilds. Following his second marriage to a wealthy widow in 1669, however, Bol seems to have largely given up painting. Slightly less than two hundred paintings by the artist are known, as well as a handful of etchings.As a draughtsman, Bol was both gifted and prolific, with a manner at times so close to Rembrandt, particularly in the 1630s and early 1640s, that the drawings of the two artists have long been confused. (As Wilhelm Valentiner has written, Bol ‘is perhaps the most brilliant of all the followers of the master...He was also an excellent and fertile draughtsman, and here also the dividing line between his works and Rembrandt’s originals is a difficult problem.’) Both artists often treated the same subjects in their drawings, and Bol was not averse to taking a compositional idea or motif of Rembrandt’s and making significant changes to create a wholly new image of his own. As Valentiner also noted of Bol, ‘He is one of the finest draughtsmen among the Rembrandt pupils. This applies, however, only to the time when he was with the master or worked under his influence. His style in drawing changed in later years; the clarity of the pen lines disappears and an over-all soft sepia wash takes its place...The forties are the most successful period of Bol in his Rembrandtesque epoch.’ Bol’s oeuvre as draughtsman includes composition studies for paintings and etchings, studies for portraits, figure studies and the occasional landscape. In 1979, Werner Sumoswki was the first scholar to assemble a coherent group of about thirty-five drawings that could be securely attributed to Bol, to which another forty-odd drawings may be added, by virtue of their close stylistic relationship to the works of this core group.